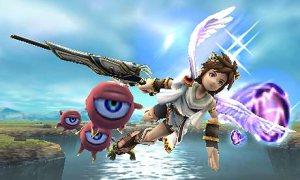 Kid Icarus Uprising sought to resurrect Nintendo’s long-dormant Kid Icarus franchise (last seen on the Game Boy twenty-one years prior) and turn it into a modernized action game. For the most part, Uprising succeeds in its mission. Taking cues from the likes of star Fox 64 and God of War, Uprising’s stages alter between hectic on-rails shooter and grounded beat-em-up.

Both segments use the same style of control, Pit’s movements are controlled with the thumbstick, the touch screen is used for aiming,and the L trigger performs attacks. It’s a simple setup that’s easy to learn, and works in surprisingly versatile ways. Though the setup works best in the flying segments, because when Pit is on land, the touch screen is also used to control the camera. As one might guess, using a touch screen to move a camera and target enemies can feel muddled, which takes away some of the smoothness from the experience. 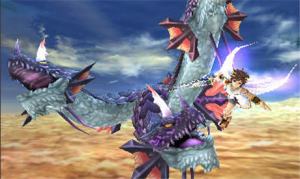 The story is typical Nintendo: The forces of the underworld are causing mayhem and chaos, and the goddess Palutena sends her warrior angel Pit to put a stop to it. It’s a simple plot, but one that comes alive due to the colorful personalities of the characters, and a good dose of fourth-wall breaking humor. It does introduce the trope of a black-clad “dark” version of its main character, but at the least, the game and character in question are aware of the trope. What might have otherwise been a series of anime cliches is made into an amusing parade of charm and character. There are also few cinema tics, with the characters instead giving their say-so about nearly every situation Pit finds himself in. It can get a little too chatty at times, but for the most part it’s entertaining banter.

A sleek visual look make the game one of the most eye-catching in the 3DS library. The character models are detailed, and the world’s colorful. It’s 3D effects are limited, but turn the 3D off and you’ll soon find you want it back on. The musical score is surprisingly versatile, taking cues from Super Smash Bros., Uprising’s score is suitably epic and oftentimes gives the game an heir more akin to a console title.

Multiplayer modes come in two varieties: Free-for-alls see players battle each other down to the last man standing, while Light Versus Dark mode sees two teams of three face one another, once the team members of a team are damaged enough, one of their comrades will become one of the angel characters (Pit for light, Dark Pit for dark). Victory is attained by defeating your opposing team’s angel. These multiplayer modes are fun additions to what is already a hefty adventure, and playing both modes unlocks more weapons and items that can be used in single and multiplayer, giving you plenty of reasons for return visits. 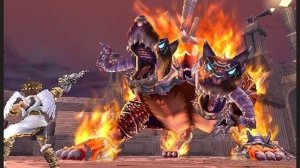 There are many unlockables, trophies and challenges to be found. Long after you’ve finished the main adventure, Uprising makes sure you have plenty more to do. You’d probably want to replay it all anyway, as the story mode is a much larger scale adventure than you would expect from a handheld title. And the multiplayer modes – while sometimes a little too chaotic for their own good – are fun little deviations. It’s not only a great 3DS game, it also brought a relevance to an abandoned Nintendo franchise that it never quite had before.