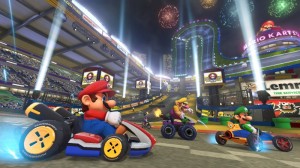 Mario Kart 8 is essential for any Wii U library, and possibly the most fine-tuned entry in the beloved series. The HD visuals combined with the colorful Mario aesthetics make it an absolutely gorgeous game, but the real highlight isn’t in the visual department. What makes Mario Kart 8 work so well is its overall structure.

Weapons like Koopa Shells and Lightning Bolts return, it wouldn’t be Mario Kart without them. But while most entries seem to favor the racer who was lucky enough to nab the best items, Mario Kart 8 balances the items and instead emphasizes player skill and understanding the track designs.

Drifting and stunts give players a small boost, as they have in past Mario Karts, but here you’ll find the tracks are largely built around them. Ramps and curves are liberally spread out across the tracks, leaving the player to learn every last one of them. Missing even a single drift boost can impact where the player scores when they cross the finish line. 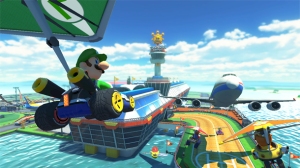 That doesn’t mean the game is overly demanding. This is still Mario Kart, after all. While it may take some mastering to be able to whiz through the tracks, the aforementioned items – no longer taking center stage – are now used to smooth things out.

New items include the Boomerang – which can be used up to three times, with each throw having two chances to take out opponents – and the Piranha Plant, which chomps nearby racers, giving you a boost in the process. Then there’s the Super Horn, which sends a shockwave that not only takes out other racers, but incoming projectiles as well. That includes the infamous Spiked Shell.

These new items join most of the series mainstays, and help bridge the gap between player abilities, making races feel more unpredictable than they might otherwise be. Though Nintendo might have gone a tad overboard when trying to balance the frequency of these items, as Mushrooms seem annoyingly common, which may get frustrating given the limited effectiveness of their boosts.

It’s not just that the mechanics have been refined that make Mario Kart 8 such a blast, the track designs themselves are among the best in the series, and greatly benefit from anti-gravity sections, which allow for some creative twists to what is to be expected from Mario Kart tracks. Turning the courses upside down and driving against walls brings to mind Super Mario Galaxy or the bonus stages from Sonic the Hedgehog 2, and it brings a sense of freshness to the Mario Kart series. Retro tracks return, with slight modifications to take advantage of the anti-gravity segments. They’re all the better for it.

One track sees you driving against waterfalls, grabbing small boots so you don’t fall behind in its current, while another seems to be Nintendo’s recreation of Sugar Rush from Wreck-It Ralph. The tracks boast some of the most fun designs in the series (not to mention a diversity of stunning visuals between them), and it lacks that gimmicky stage or two that seemed thrown in to some of the past few entries.

If only the character roster could share in that creativity. While the obvious favorites like Mario, Luigi, Yoshi and Peach return, many of the newcomers feel like bottom of the barrel selections. The Koopalings are a welcome addition (even if they do take up a good chunk of the roster), but too many alternate versions of existing characters (namely baby versions of the Mario Bros. and Princesses) feel tacked on. And Pink Gold Peach may just be the low point in Nintendo character ideas. It’s true, the play styles of the characters and karts are what’s important, but given this is a series with no shortage of heritage to draw from, the inconsistent roster feels muddled.

But the vehicle diversity – which includes the return of Mario Kart Wii’s bikes – largely make up for the wonky characters. You’ll find that each vehicle adds its own tweaks to the gameplay, which makes for a more varied experience.

The online features will probably have you returning more than anything. Mario Kart 8 will have you testing your abilities in races or tournaments with players from around the world, meaning you’ll always have someone to play with, and it all works so smoothly that you wish Nintendo’s other franchises could offer such an online experience. You can even choose your own settings (limiting items or no items at all, for example), and hosting tournaments creates its own Miiverse community, making communication between players all the easier.

Best of all, you can now take the replays of your races, and post their highlights in a video directly to YouTube via Miiverse. You don’t exactly get a lot of editing tools, but the option to upload videos directly from the game is a treat, and another feature I hope makes return appearances in Nintendo titles. 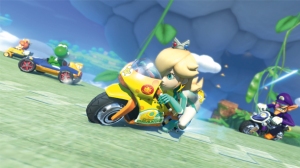 Mario Kart 8’s one great drawback is the Balloon Battle mode. Since the series inception, Balloon Battles have been one of Mario Kart’s greatest highlights. But here it’s all watered down. Gone are the battle arenas, now Balloon Battles are held in one of the standard race tracks, with the anti-gravity sections omitted of all things. You still must deplete your opponents’ balloons with the use of items, but the experience has been sullied of the very aspects that made it one of the most memorable experiences in the series. It’s a bit baffling that Mario Kart 8 gets so much right, and yet it’s the battle mode of all things that is left out of its vision.

When considering the overall package, it’s a small detraction. Mario Kart 8 is as fun and addictive as any party game Nintendo has made. The control options are a plenty, whether you prefer traditional methods or motion controls, Mario Kart 8 has them all fine-tuned. And the presentation, from the eye-popping HD visuals to the beautifully orchestrated score, Mario Kart 8 delivers in spades. It has its missteps, but they are forgivable when you consider this is likely the finest of all Mario Karts. And doesn’t that say it all?