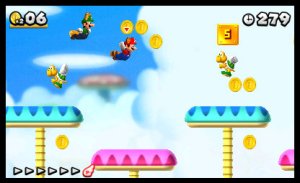 In 2006, Nintendo released New Super Mario Bros. for the Nintendo DS. At the time, it had been fourteen years since Mario and Luigi starred in the genre that made them famous. New Super Mario Bros. brought back the side scrolling, hop-and-bop platforming from Nintendo’s heyday, and established the formula for a new generation. The “new” in the title meant something.

New Super Mario Bros. 2 doesn’t share the advantage of old-made-new that its predecessor did. It’s a tried and true platformer, with the same tight controls and technical polish that Mario is known for. But it lacks the series’ trademark sense of imagination. There is little to be found here that couldn’t be found in New Super Mario Bros. on the DS or Wii. Even the music is largely comprised of recycled or remixed tunes from the DS original.

That’s not to say that New Super Mario Bros. 2 is completely void of ideas. This entry’s big draw is its focus on coin collecting. Gold coins are all over the Mushroom Kingdom (more so than usual), and the Mario Bros. are determined to rack up a million of them, with the coins you collect in any given stage being added to your grand total upon completion. 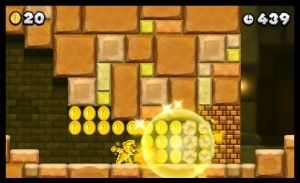 The game has a lot of fun with how it goes about this gold frenzy: Jumping through gold rings causes Mario’s enemies to leave trails of coins wherever they go, and a new spin on the classic Fire Flower turns Mario gold (and Luigi silver, naturally), allowing you to shoot gold fireballs and turn everything they hit into more coins. Rescuing Princess Peach becomes an afterthought in the midst of this Scrooge McDuck level of penny-pinching.

The coins are a fun diversion, but one that doesn’t add any real depth to the experience. Game overs are never a worry, as the game stays true to the series’ tradition of one-hundred coins granting an extra life. With the sheer abundance of coins littered everywhere, you’ll find that your extra lives skyrocket to the point that you’ll never have to worry about seeing a game over screen, and the level design is hardly difficult enough to justify such generosity. It’s one of the easiest Mario sidescollers, made easier through its own gimmick.

Despite these drawbacks, New Super Mario Bros. 2 is a fun game. True to the nature of the series, it controls like a dream, the gameplay is as fluid as ever, the 3D gives the game a nice visual pop, and it strikes a few joyous nostalgic moments (the raccoon tail from Mario 3 returns, as does recurring boss Reznor from Mario World). But for all the things it does right on a technical level, it lacks just as much in terms of substance and creativity. Sequels have rarely slowed the imagination of the Mushroom Kingdom, but New Super Mario Bros. 2 often feels rehashed, relying on gimmicks to add a superficial sense of identity to the mix.

New Super Mario Bros. 2 is a fun, solid platformer, but that “New” in the title is a little on the undeserved side this time around.