The gameplay remains largely the same. Up to four players can join in a side scrolling romp as either Mario, Luigi, or two different colored Toads (all of which play identically). This time around, an added fifth player can use the Wii U Gamepad to help (or hinder) the other players by creating platforms using the touchscreen. It’s not a radical use of the Wii U Gamepad, but it does add a little ‘newness’ to this tried and true formula.

NSMBU’s primary new power-up is the flying squirrel suit, which allows Mario and company to glide through the air and latch onto walls. It won’t be remembered as one of the great Mario power-ups, but it brings some fun to the table, and compliments the returning Fire Flowers, Ice Flowers and Power Stars of yesteryear. 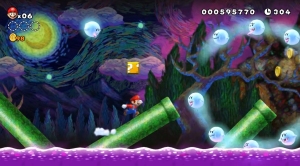 Additionally, a character called Nabbit will occasionally appear in a previously completed course, which transforms the stage into a hectic chase sequence. Catching Nabbit will award players with an enhanced version of one of the game’s power-ups.

While the game mostly plays up familiar Mario elements, there are some new modes added to New Super Mario Bros. U. Challenge mode and boost rush add a little deviation from the usual princess rescuing, while adding some extra difficulty to the mix, while also giving you the chance to play as your Miis if you so desire.

New Super Mario Bros. U was the first time the Mario series had been presented in HD. Although the visual design of the game plays things safe -lacking the robust visual splendor of Galaxy- the added HD gloss does make the game more eye-popping than its predecessors. Unfortunately, the music is mainly recycled from New Super Mario Bros. Wii. It’s nice and catchy, but far from the most memorable in the series.

New Super Mario Bros. U may not entirely justify that “New” in the title, but it is nonetheless an entertaining and meaty platformer that outdoes the other entries in the series. If anything, it’s proof that even when Mario isn’t at his A game, he’s still outperforming his rivals when it comes to pure fun.