Super Smash Bros. on 3DS is a prime example of “if it ain’t broke, don’t fix it.” That’s not to say that no tweaks have been made – this is probably the most balanced Smash Bros. yet – but it serves more as a means to bring the winning formula of the series to handhelds than it does to push it forward.

But that’s not necessarily a bad thing. There was a six year gap between Brawl and this 3DS addition to the series, after all. The series has hardly been exhausted. And when the game is as fun and addictive as this, why should Nintendo tamper with it?

It’s a great transition, I might add. The brunt of the Smash Bros. control scheme and mechanics translate faithfully to the 3DS, with only minor gripes directed towards the blocking and grabbing mechanics, performed with the system’s shoulder buttons, which feel a little less fluid than on the home console Smash Bros. titles.

The core appeals of the series, however, are the deep yet accessible fighting gameplay, and the ludicrous amount of fan service provided by the colorful roster of Nintendo characters, as well as the stages and items.

It’s the biggest Smash Bros. roster to date, with the majority of characters from Brawl returning along with a good number of new characters. Some of these new characters, like retro favorites Little Mac and Duck Hunt, or newer faces like Shulk and Rosalina, are welcome additions. Though some others, such as Dark Pit or Lucina, feel like Nintendo is scrapping the bottom of the barrel (in the case of the former, director Sakurai may just be giving himself a pat on the back for directing Kid Icarus Uprising). When one considers some of the fan favorites that were left out (Ridley, Dixie Kong), one has to wonder what exactly the criteria is to make it on the Smash Bros. roster these days.

Two new third-party characters brighten things up, with Pac-Man and Mega Man bringing an added dose of nostalgia and gameplay variety to the table (regrettably at the expense of Snake). 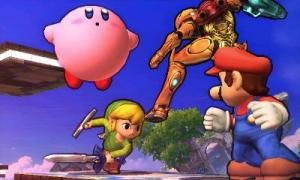 The great thing about this particular Smash Bros. is that it caters to both of the diehard Smash Bros. fan bases: Those who prefer the fun, chaotic party game aspects of the series, and those who take it as a serious fighter. Online modes, appropriately dubbed “For Fun” and “For Glory” cover both fields, with the former allowing all stage gimmicks and items and the latter featuring more straightforward, item-free stages. Both styles have their benefits (one gives you serious, “no excuses” victories and defeats, while the other lets you take full advantage of the toy box of items at the game’s disposal), and its good to see the series acknowledge its diversity.

There are the usual single-player and bonus modes. Classic and All-Star modes return, as do home run contests and break the target. One unfortunately lax new mode, Smash Run, features players running around a map, fighting classic game enemies and collecting stat boosting power-ups before facing off against traditional Smash opponents. It’s worth a look, but lacks replay value.

As usual for the series, Super Smash Bros. on 3DS includes countless unlockables. So just in case the insanely addictive multiplayer wasn’t incentive enough for you to keep coming back, unlocking every last stage and trophy might just have you hooked.

Of course, it’s that tried-and-true gameplay that makes Smash Bros. on 3DS shine. Play as your favorite Nintendo character, do some damage to your friends’ favorites, and send them flying off stage in an extreme sumo-style bout.

It may not be the same leap forward for the series that Melee was to the original or that Brawl was to Melee, but it does prove that the immense fun of the series is perfectly complimented on a handheld. Smash Bros. has always been a tough series to put down, and now that you can take it anywhere, that may be truer than ever.