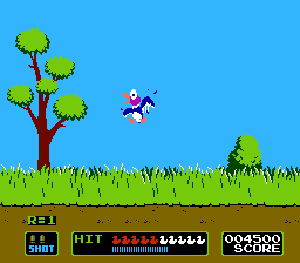 Back in the day, Duck Hunt was one of the most prolific games on the NES. It gave gamers a simple task: Shoot ducks with the NES Zapper (a gun peripheral that came packaged with the game), or risk being mocked and laughed at by your dog. The simplicity of the game made an impact on the NES’ appeal, and Duck Hunt was so iconic with the console that it soon became bundled with Super Mario Bros.

Now that you can play Duck Hunt on Wii U, you can see how age has effected the game in both positive and negative ways.

On the plus side, the game is still fun. The NES Zapper is replaced with a Wii Remote this time around, with the motion control probably making the game more intuitive than ever (though some targeting blips still occur).

There are three game modes: Game A has you shooting at one duck at a time, Game B has two ducks flying on screen at once, and Game C shifts the game to shooting clay pigeons (two of which are on screen at once), with the clay flying from the foreground to the background, becoming harder to hit as they shrink in the distance.

All three game modes serve as fun little mini-games, and the simplicity of it provides retro charm. On the downside, all three modes put together don’t pack a whole lot of depth, which may effect the game’s replay value.

The thing is, Nintendo has excelled at mini-game collections for years now, and regrettably, compared to even one of the mini-games of Nintendo Land, Duck Hunt feels shallow. It might seem unfair to compare an NES launch game with one from the Wii U, given the incredible leap in technology. But the sad fact is that while Duck Hunt may still be fun, it no longer feels as addictive as it once did. The simplistic gameplay is still charming, but the overall package doesn’t hold up quite so well on its own.

Duck Hunt is definitely worth a look on the Wii U’s Virtual Console, but you may find it becomes more complimentary to the rest of your Wii U and Virtual Console library than a gaming experience in itself. It may not be the go-to game on your Wii U menu, but it is a fun little deviation between meatier games.

One thought on “Duck Hunt Review”