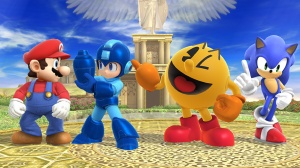 The character roster and general gameplay remain the same as they were on 3DS. It’s tight and polished, and more balanced than the Smash Bros. of yesteryear. The character roster is varied and full of personality: The likes of Little Mac, Duck Hunt and Pac-Man bring the nostalgic charms, while characters such as Rosalina, Wii Fit Trainer, and Villager represent Nintendo’s contemporary appeal. Then there’s Mii Fighters, who add a personal touch to battles. They join the majority of Brawl’s roster and a host of other newcomers to ensure there’s never a shortage in play styles (Though I still question why Kid Icarus is more represented than Metroid or Donkey Kong).

But while the characters and gameplay may be identical to that of the 3DS Smash Bros., what the Wii U version does with them is entirely its own.

There are a plethora of new modes: Smash Tour sees players face off in a Mario Party-style game board, collecting fighters and power-ups as they go, and ending in a battle where said collectibles are put into action. Trophy Rush works as Smash Bros’ take on Tetris, and lets players break falling blocks and collect trophies and character customizing items. Master Orders throws players into battles of their choosing, with more difficult challenges bringing better rewards. Crazy Orders is an intensified version of this, with players fighting battle after battle, accumulating rewards with every victory, but a single defeat means losing most of your prize.

These are just a few of Smash Bros. for Wii U’s new modes. They join many returning favorites, from Classic and All-Star to Break the Targets and Home Run Contests. A fan favorite mode from Melee, Events, makes a comeback, and includes some of the game’s most difficult challenges. The Stage Builder from Brawl also returns, better than ever due to having a few more tools at display, and the Gamepad opens up more creative possibilities with your stage designs.

Of course, what will have you coming back the most is multiplayer. Super Smash Bros. has always specialized in multiplayer, and that’s truer here than ever.

Local play allows up to eight players, eight players, to partake in the mayhem. And mayhem it is. Having eight characters all at once can be a little overwhelming, and you may lose yourself amidst all the chaos. But in the end it’s great to have as an option. At the very least, having five or six players still feels grounded while also allowing more players than past entries in the series.

Online multiplayer is also a treat. Though it lacks the 8-player option, it does, like the 3DS version, include modes of play that cater to casual audiences as well as the more hardcore crowd. For Fun includes four-player free-for-alls as well as team matches, where all the items, Final Smashes and stage gimmicks are left intact. Meanwhile, For Glory includes free-for-alls, team matches, and one-on-one bouts where stages are leveled, no items allowed, and wins and losses are recorded, making these matches all about player skill and bragging rights.

The online modes are a huge improvement over Brawl. It’s much easier to find other players, and now players are penalized for being inactive or quitting mid-match, which encourages more fun battles.

However, with the online modes comes Super Smash Bros. for Wii U’s one notable flaw: The game runs smoothly for the most part, and it certainly feels more together than Brawl’s online capabilities. But when it does encounter problems, it does so with a vengeance. You may go through a dozen matches with no problems whatsoever, and then suddenly you find yourself in a battle that seems to be moving in slow motion, with the characters reacting a few seconds after button presses, if at all. At its worst, I encountered what should have been a two-minute bout that was slowed down to ten minutes of freeze frames. Most matches should work fine, and there are few things in gaming as addictive as playing Smash Bros. with people around the globe, but in those matches where the game can’t keep up with itself, it can be unbearable.

The series’ jump to Wii U also means this is the first time Super Smash Bros. has been presented in HD, and it’s absolutely beautiful. The stitches on Mario’s overalls, the scales on Bowser’s arms, the sheen of Samus’ armor. Nintendo’s characters have never looked more detailed, and the animations are fluid and lively. The stages are downright eye-popping, and boast just what the Wii U hardware is capable of.

The musical score is the best in the series. It retains the majority of Brawl’s tracks, while introducing far more original and remixed themes than the 3DS version. The score is one of the best in Nintendo’s history, and is every bit as much a love letter to the heritage of Nintendo as the characters themselves.

If Super Smash Bros. for 3DS was the appetizer, consider Super Smash Bros. for Wii U to be the main course. It’s everything we love about Super Smash Bros. made bigger and better than ever. It relishes in any idea it deems fun, no matter how big or how small (you can even take screenshots, and then scribble on those screenshots with the Gamepad). The game boasts a multitude of controller options – all of which I’ve played feel well integrated – meaning you can play however you like. The replay value is nearly endless, and it’s more creative, balanced and fun than any Smash Bros. before it.

Whether you’re old enough to get all the references or the Wii U is your first foray into the worlds of Nintendo, Super Smash Bros. for Wii U has something for everybody.

7 thoughts on “Super Smash Bros. for Wii U Review”