With The Hobbit: The Battle of the Five Armies having been released, The Hobbit film trilogy has officially come to a close. As was the case with the first two Hobbit installments, the reception to the film has been somewhat mixed (to put it lightly). Some hail it as a fitting end to the series, while others continue to cry foul at the film’s deviations from the source material, among other complaints.

Sadly, while the Hobbit trilogy’s box office numbers are on the positive side, it seems the overall outlook of this trilogy will be less positive, with some even negatively comparing them to the Star Wars prequels (which is grossly unfair. Even with their missteps The Hobbit films never created gaping plot holes in their mythology like the Star Wars prequels did). This is a crying shame, because while The Hobbit films do have their flaws, and are not on the same level as Peter Jackson’s Lord of the Rings adaptations, they are much better than they get credit for.

Yes, the Hobbit films do have an abundance of CG, which makes them look more artificial than the Lord of the Rings films. And yes, there are some unnecessary fan service moments. And yes, the first two Hobbit films had some pacing issues (something I think the third film ironed out). But none of these issues are hardly as film-breaking as they’re made out to be.

Besides, don’t the much-beloved Marvel movies of today have an abundance of CG? They certainly cake-on the fan service, and don’t seem to get any flak for it. And they haven’t exactly been consistent, either (for every Guardians of the Galaxy there was a Thor: The Dark World). So why do the Marvel films get a free pass? It may be easy to say that The Hobbit has the unavoidable comparison to The Lord of the Rings trilogy, in which case it falls short. Though “not being as good” as a previous work doesn’t really justify the level of criticisms The Hobbit films have received, and it’s not exactly like The Lord of the Rings films would be an easy act to follow.

Of course, there lies another source of contempt for The Hobbit’s detractors: The Hobbit was a shorter novel than any one of the Lord of the Rings books, so did it need to be a trilogy? Admittedly, no. It didn’t. But at the same time, I don’t think it’s innately a problem that it did become three films. After the three Lord of the Rings films, a single-film follow-up may have been underwhelming to audiences. The original two-part adaptation made sense, but three films, while maybe stretching the material, works for the kind of adaptation the films ended up being.

One thing that’s important for people to remember is that these are adaptations. They were never going to be identical to the books. Just like The Lord of the Rings weren’t identical to the books. Changes were bound to be made. But if you’re a purist, you can at least say that all the added material in the Hobbit films still comes from J.R.R. Tolkien’s various writings, whereas the changes made to Lord of the Rings were mainly made up by Peter Jackson and company. The only notable addition Peter Jackson made to The Hobbit that I can think of is Tauriel, and while her love story in the films may be a tad forced (though ultimately harmless) at times, at least she brings some much-needed femininity to the series.

But the rest of the added material is all taken from Tolkien’s works in one way or another. Although Tolkien himself only lightly touched on most of the side stories that were brought into the films, it made sense for the filmmakers to shed more light on them. The whole side story with the Necromancer, for example, is only mentioned in passing in the original book, but had strong connections to the bigger goings-on in Middle-Earth involving the “War of the Ring.” After already having brought The Lord of the Rings to life on the screen, it makes sense that the filmmakers would put a stronger emphasis on that connection between stories.

First and foremost is the world building. Very few fantasy films have so much love for the world they depict, the story they’re telling and the characters within them. It helps that Tolkien put so much attention to even the most minute details, but just as much credit goes to Peter Jackson and company, who clearly love this world as much as anyone. The Hobbit films, like The Lord of the Rings trilogy, feel just as much like a love letter to their source material as they do an adaptation of it. Even with the added humor of The Hobbit films, they never have that snarky, tongue-in-cheek self-awareness that downgrades the fantasy/sci-fi elements of the Marvel Cinematic Universe and the like. 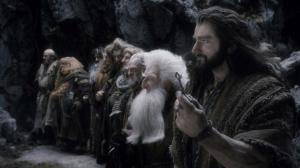 Just as important, the performances in the Hobbit films are memorable, and make the fantasy world of Middle-Earth a very believable place. It’s probably one of the best cast fantasy franchises out there, with the likes of Martin Freeman, Ian McKellen and Richard Armitage bringing life to the characters. Even the smaller roles like Stephen Fry’s Master of Lake-Town prove memorable.

It also doesn’t hurt that The Hobbit films are fun. Though the first film gets off to a slow start, after Bilbo leaves Bag End and the flashbacks become less frequent, the films become a series of spectacles. From visual effects to action scenarios to the dedication of their world, the Hobbit movies do ‘spectacle’ better than most blockbusters. They may not stack up to The Lord of the Rings from an overall filmmaking perspective, but (sans the aforementioned opener) the Hobbit movies are always fun. The third film even adds a good dose of emotion to the series, and tops the book as far as fleshed-out characters are concerned.

In the end, The Hobbit trilogy is flawed, but much better than a good deal of its reputation suggests. No, the Hobbit films don’t reach the heights of The Lord of the Rings trilogy, but when compared to the majority of today’s blockbusters – which often amount to little more than noise and explosions – The Hobbit trilogy is in a unique place among fantasy films where things like world-building and character actually mean something.

3 thoughts on “In Defense of The Hobbit Films”