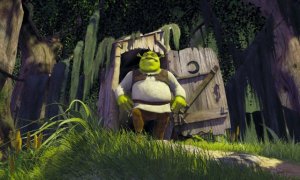 When it was released in 2001, Shrek was a revelation. An animated fairytale that was irreverent, sarcastic, and made just as much for the adult crowd as it was for kids (if not more so). It inspired countless other animated movies over the next decade that tried to replicate its style, none of which even began to approach the charm and wit of the originator. While these cheap imitators are (mercifully) falling out of favor, the original Shrek still holds up.

Shrek tells the story of its titular ogre Shrek (Mike Myers). Shrek prefers a life of solitude in his swamp, away from all the people who wish him ill for just being who he is. But Shrek’s world gets turned upside down when his swamp becomes overrun with fairy tale characters. It turns out, the fairy tale lot have been dumped in Shrek’s swamp by one Lord Farquaad (John Lithgow). After Shrek ventures to meet Farquaad accompanied by a talking Donkey – aptly named Donkey (Eddie Murphy) – Farquaad agrees to give Shrek his swamp back, provided Shrek can rescue the fair Princess Fiona (Cameron Diaz) from the clutches of a fire-breathing dragon.

So Shrek and Donkey set out to rescue the princess and get Shrek his swamp back. But along the way, Shrek realizes his swamp may not be the thing he needs most in his life.

What set Shrek apart from the crowd back in the day was its attitude. The 90s animated scene had been dominated by Disney musicals that largely followed the same formula. Audiences in the early 2000s wanted something different, and Shrek gave it to them.

It’s still a fairy tale, like so many animated films, but Shrek is no Prince Charming. Shrek is large, cranky, and down-to-earth. He burps and scratches his rear whenever he feels the need to. And he’s immensely likable. Donkey may be an annoying sidekick, but he perfectly compliments (and irritates) the curmudgeonly hero. Princess Fiona similarly goes against many princess stereotypes. Lord Farquaad – while maybe deserving of a little more screen time – also proves to be a memorable and hilarious villain.

The main characters all went against the conventions Disney established into animated films, and they all became memorable, adult personalities. The overall flavor of the movie reflects this, with characters like Pinocchio, the Three Little Pigs and the Gingerbread Man (referred to here as ‘Gingy’) all being turned into hilarious parodies of themselves. There are plenty of innuendos, sight gags, and winks to the adult crowd that made Shrek feel far more grownup than the movies of Disney and their contemporaries at the time. Yet, Shrek was, and is, still very much a movie kids can enjoy. 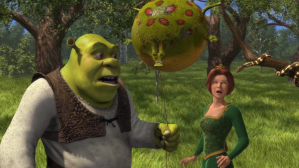 The film remains bright and colorful, though the character models are looking dated by today’s standards. It’s forgivable when one considers the animation was groundbreaking in its day, but perhaps the attempt at making more ‘realistic’ looking humans is what has aged. Comparing it to the more exaggerated character designs of some other early CG animations (including Toy Story, released six years prior to Shrek), you may find that the human characters in Shrek no longer look nearly as believable as they once did.

But again, that’s forgivable. The one aspect of Shrek that simply doesn’t hold up is the soundtrack. Shrek makes extensive use of licensed songs, and while some of them are appropriate for their respective scenes, I’m afraid nothing screams “this movie was made in 2001” quite like Smash Mouth. While the story and humor of Shrek hold up brightly, the soundtrack is the aspect of the film that feels dated.

It’s a small price to pay, however. While the movies it inspired may have lacked its heart, Shrek is still a great film. It’s smart, hilarious, and appeals to all ages. The years may have proven that Dreamworks couldn’t consistently replicate this winning formula (Shrek’s own sequels fall short, though Shrek 2 comes close), but Shrek still represents Dreamworks at their best.