Super Mario 3D Land was the first standout original title on the Nintendo 3DS. Before its release in 2011, the 3DS’ library mainly consisted of quality remakes (Star Fox 64 3D) or uneventful original titles. But then 3D Land brought the handheld up to speed, and it hasn’t looked back.

Super Mario 3D Land looks and plays closely to the 3D Mario platformers, though its level structure and pacing make it more resemble the plumber’s 2D iterations. Your control over Mario feels similar to Super Mario Galaxy, though the spin attack is absent, and many of Mario’s acrobatics altered (no more triple jumps, long jumps are performed after rolling, and somersaults now need a brief charge-up). Mario’s moves are back to basics.

An inclusion of a run button makes things feel more in line with the 2D sidescrolling Mario games, meaning that Mario will leisurely stroll through a stage unless the button is held at all times. It may pay homage to Mario’s roots, but the run button feels slightly awkward when controlling Mario in a 3D space.

The stages, while having the appearance of those found in Marios 64 and Galaxy, are more closely associated with Super Mario Bros. 3 or New Super Mario Bros. The levels are timed, like in the 2D games (though you can find clocks to add to your time), and the goal is not to collect stars, but to reach the end of the stage (in the form of a flag pole, naturally).

In terms of structure, 3D Land enjoys paying tribute to a number of Mario’s most beloved games, but it doesn’t stop there. One of the big draws of the game is the return of the Tanooki Suit, which returned here for the first time since its debut in Super Mario Bros. 3 over two decades earlier. Some changes have been made to how Tanooki Mario works. He can no longer fly, instead being restricted to fluttery jumps (making trickier platforming levels a bit easier) and the ability to turn into a statue is reserved for post-game content. Tanooki Mario does retain his tail whip attack, which basically functions like the aforementioned Galaxy spin attack. Tanooki Mario may work differently, but you can’t deny the pure joy of seeing Mario in that ridiculously fluffy outfit once again.

The other power-ups include the Super Mushroom (which makes small Mario return to his normal stature after being hit by an enemy), the ever-present Fire Flower, the Propeller Box from New Super Mario Bros. Wii returns, and the game introduces one new power-up to Mario’s arsenal: the Boomerang Suit. 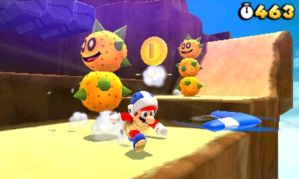 Similar to Hammer Mario from Super Mario Bros. 3 (which saw Mario turn the tables on the Hammer Bros.) Boomerang Mario follows suit and gives Mario the same boomerang throwing capabilities of the Boomerang Bros. This new suit serves as a good compliment to Mario’s repertoire of zany power-ups, though it can feel like little more than a slightly altered Fire Mario. Jumping over your boomerang repeatedly and watching it take out enemies from both sides of you is entertaining, though the power-up is neither as inventive and strategic as Cloud Mario nor as destructively fun as Rock Mario of Galaxy 2.

The game was the first to make extensive uses of the 3DS’ namesake 3D effects. I dare say that playing the game without the 3D turned on may even take something away from the experience.

Super Mario 3D Land boasts a number of 3D visuals at just about every instance: blocks will float into your immediate view, piranha plants spit ink more at the player than at Mario, the difference between foreground and background have never been more evident, and in some top-down sections (such as a level dedicated to The Legend of Zelda series), Mario will leap up at the player with every jump.

The visuals are joined by a fun musical score. The new tunes are catchy and charming, and compliment some returning favorites. It may not be one of the best soundtracks in the series, but it suits the game.

3D Land is definitely a solid Mario title, though it does suffer from a few drawbacks. If you’re a Mario veteran, the game will be a breeze for the first five of the game’s eight initial worlds, and when the difficulty picks up, there are still few instances in which a couple retries won’t suffice. The difficulty does, however, take a strong spike after you beat the game and the new challenges begin.

Another downside is that, for a Mario game, 3D Land is strongly by-the-book. While certainly fun and engaging, the level design of 3D Land lacks the constant sense of creativity of a Mario World or Galaxy. 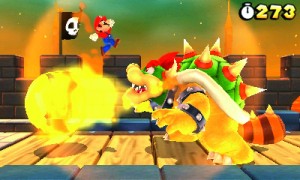 That’s not to say the game doesn’t have its own sense of inventiveness. Nintendo once again shows that they can conjure fun gameplay and level structure like no other. But the game’s very best moments feel like condensed iterations of Galaxy’s machinations. Even the boss fights are variants of the same three enemies: Boom-Boom from Super Mario Bros. 3 returns alongside his new boomerang-wielding female counterpart, Pun-Pun, who join the perennial Bowser. They’re fun, but the boss fights are too few in number and too lacking in variety.