There was a moment at the very end of The Legend of Zelda: Skyward Sword which pitted Link against army after army of monsters in order to reach the big bad (and the captured Princess Zelda) at the end. It was a barrage of action and spectacle, akin to being the Nintendo equivalent of the Battle of Helm’s Deep. If that moment left you wondering what an entire Zelda game built around such moments would be like, then Hyrule Warriors gives you a bit of an idea, if maybe not entirely fulfilling on its promise.

While Mario and friends regular deviate from their core series for some karting and a few rounds of tennis, Zelda rarely takes the opportunity to shy away from the series’ primary timeline for the sake of a fun little deviation. But Hyrule Warriors basks in the opportunity to tell its own side story in the series, throwing in as many references to past entries as possible without worry about how it might effect the series’ canon.

Primary and supporting characters from the Zelda series make a return, with the likes of Link and Zelda being joined by Impa, Midna and Darunia, among other familiar faces from the series. Some original characters also make the playable roster, but they feel a tad misplaced and don’t mesh well with the established characters. The new editions end up feeling more like anime cliches than members of the Zelda cast. 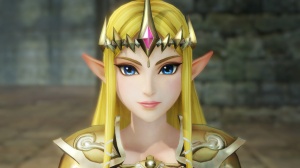 It’s not just the characters, but the world, story and scenarios of Hyrule Warriors are all swimming in Zelda fanservice. The story tells of an ancient witch who watches over the Triforce, until she gets possessed by the spirit of Ganon (who else?), corrupting her heart and mind. She then uses the Triforce’s power to open portals throughout time to search for the fragmented pieces of Ganon’s soul, which have been scattered throughout time.

Of course, this plot really is little more than an excuse to cram all the aforementioned characters together, and to recreate some of the series’ iconic moments. But it works for what it is, and who am I to argue about something that’s basically a love letter to one of gaming’s most revered legacies?

But alas, the fanservice is all this game has to connect it to that legacy. The game is titled Hyrule Warriors for a reason. While the game is a loving tribute to the Zelda series, as a game it is, first and foremost, a Dynasty Warriors title. And while this Dynasty Warriors gameplay can be fun, it’s best played in short bursts, as longer play sessions reveal Hyrule Warriors to be a repetitious affair, lacking the depth of design that Zelda is known for.

Hacking and slashing through hundreds of enemies at a time is thrilling, and gives you plenty of opportunities to try out the various combos you’ll learn as you level up, but every character -despite having aesthetic differences – all play the same, and they all get the same bonuses as they gain experience, and the enemies similarly lack variety. A little bit of life is added to the equation by some light strategic elements, such as overtaking enemy outposts and making sure your own bases don’t become overrun, but even these strategies end up being performed by the same hacking and slashing of enemies. 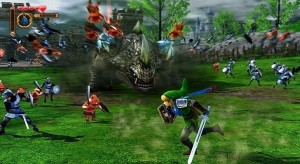 There is a good deal of content to the package, however. There are numerous secrets and bonus objectives to be found on any given stage, and the plethora of playable characters means the game has a bit more replayability than it might otherwise have should you wish to level all of them up. Additionally, an aptly-named Adventure Mode provides a different experience, not to mention retro charm.

In Adventure Mode, players guide an 8-bit Link through a grid-like map, where each square is a mission where Link has the opportunity to win items and unlock new areas on the map. The Adventure Mode and the game’s various challenges add an addictive nature to the game, but none of them individually provide the depth to make Hyrule Warriors a truly compelling gaming experience.

As a love letter to The Legend of Zelda, Hyrule Warriors gets top marks: It reintroduces us to many beloved characters, recreates some epic scenarios from the past, and includes some top-notch remixes of classic tunes. The aesthetics inspired by Ocarina of Time, Twilight Princess and Skyward Sword make this a kingly piece of Zelda fanservice (though being the Wind Waker fan that I am, I can’t help but feel left out of the loop).

But in terms of it own merits, the fun of Hyrule Warriors is hampered by repetitious gameplay and an overall shallow experience, not to mention some technical issues like long load times and an inconsistent frame rate (somewhat forgiveble, given the sheer number of characters on-screen at any given time).

Hyrule Warriors captures the spectacle of that climactic moment of Skyward Sword, but it’s entirety lacks the heart and emotion of that single moment. Is Hyrule Warriors fun? Yes. But it’s no legend.