Its name might bring to mind a mango-flavored iced tea, but make no mistake about it, Tropical Freeze is an inspired and challenging game that lives up to the Donkey Kong Country legacy.

Tropical Freeze begins on Donkey Kong’s birthday. As he’s about to blow out the candle on his (banana) cake, the Snomads – a gang of viking walruses, penguins and arctic owls – invade Donkey Kong’s island. The Snomads go Elsa on the place and freeze DK Island before banishing Donkey Kong and friends. But DK is not one to simply ‘let it go’ and he, along with Diddy Kong, Dixie Kong and Cranky Kong, set out to fight their way back to DK Island and kick the invaders out. It’s another simple story that’s present only when it needs to be, but at least it’s not another case of DK’s bananas getting stolen.

But story has never been DK’s strong suit. The artistry of Donkey Kong Country has always been in the game design. DKC is all about fun platforming gameplay, creative level design, high difficulty, great music and eye-popping visuals. In these regards, Tropical Freeze graduates with honors.

Retro Studio’s previous DK outing, Donkey Kong Country Returns, oozed a sense of creativity in its level design that not many platformers can match. But Tropical Freeze takes things to a whole new level. It’s often Mario who gets all the credit for Nintendo’s ability to toy with one new idea after another, but games like Tropical Freeze prove that Nintendo’s other franchises can be equally as rich in the departments of creativity. 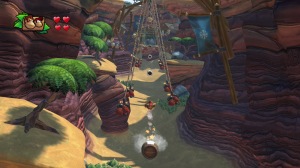 One minute Tropical Freeze will be throwing you into a savanna that looks like its decked out for the Broadway production of The Lion King, the next you’ll be making your way through a canyon filled with explosives, then you’ll be bouncing off cubes of jelly. Even the mine cart stages (a staple of the series) see so many new ideas added to the mix that each one of them feels fresh. The levels can get lengthy, but they’re swimming in so many imaginative ideas and details that you’ll enjoy every minute of them.

The gameplay isn’t anything radically different from its predecessors, but you probably weren’t expecting it to be. Donkey Kong still jumps, pounds and rolls his way through levels, feeling weightier than Mario but with a similar precision. Though a few additions have been made to the formula. DK can now pluck certain objects out of the ground, and even pick up some enemies and throw them at each other, Super Mario Bros. 2 style. Tropical Freeze also reintroduces swimming-based stages to the mix, after their questionable absence in Returns.

Diddy Kong can still be used as a kind of power-up to DK, using his jetpack to give DK a little more distance in the air. Joining Diddy this time around are Dixie and Cranky Kong. Dixie can twirl her ponytail like a helicopter and give DK a boost to his jumps, while Cranky bounces on his cane a la Scrooge McDuck, which allows you to not only jump higher, but also enables you to jump on otherwise dangerous surfaces (like spikes). The kongs all bring some fun to the table, but Dixie is undoubtedly the most useful.

The usual collectibles return, with every stage housing five, seven or nine puzzle pieces that unlock bonus content, and K-O-N-G letters that unlock secret stages. The collectibles will ensure dedicated players will keep coming back to revisit stages long after the game is over.

Rambi the rhino reappears in a handful of stages, allowing players to break their way through environments and charge through enemies. Unfortunately, no other animal buddies have returned, nor are any new ones introduced. The kongs’ bountiful new abilities may make Animal Buddies seem a tad superfluous, but with water stages returning you can’t help but wish that Enguarde the swordfish could have made a comeback at the very least.

Additional items can be purchased at Funky Kong’s shop, which includes bonuses from additional health to temporary invisibility to Squawks the parrot, who helps locate the hidden puzzle pieces. You can even buy viewable character models just for the fun of it. They may sound like small benefits, but Funky’s items will come in handy though, because Tropical Freeze is a hard game. A very hard game. 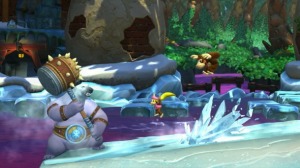 Donkey Kong Country Returns was already a tough-as-nails platformer, but Tropical Freeze ups the ante. Tropical Freeze almost feels tailor-made for the people who claim Nintendo games have become too easy. It pulls pages from the NES playbook, with even a single miscalculation resulting in bitter defeat. It’s punishing, but not unfair. Tropical Freeze asks that its players study every inch of what’s going on on-screen,  keep on their toes and always be ready to change their strategies on the fly. It’s basically Dark Souls with a Nintendo makeover.

Visually speaking, Tropical Freeze is a beautiful game. To say it outdoes Returns is an understatement. Tropical Freeze pops thanks to the upgrade to HD from Wii U, with DK’s fur bringing to mind Sully from Monsters, Inc. Most levels are a barrage of colors and textures, though some of the most beautiful stages take on a silhouette motif. It’s not just how things look that make the visuals stand out, but the presentation as well. Oftentimes there’s as much going on in the background as there is with what’s in DK’s path. The aesthetics might not have changed since Returns, but the difference in the attention to detail is staggering.

More beautiful than the visuals is the game’s soundtrack, composed by David Wise, the man behind the soundtracks to the original DKC trilogy on the SNES. The Donkey Kong Country series is beloved for its versatile and atmospheric music, and Tropical Freeze does the series proud. It’s less reliant on remixes than Returns was, but the remixes that are here stand out more, and this time we even get some remixed tracks from the masterful soundtrack of Donkey Kong Country 2. But Tropical Freeze has an identity of its own due to its original tracks, which capture a similar sense of emotion and style as the tunes of the SNES games, but appropriately brought up to date. While most of the better game soundtracks today tend to sound more like replicated film scores, Tropical Freeze succeeds in sounding like a great, modernized video game soundtrack. It’s one of the best gaming soundtracks in years.

If there are any real notable flaws with Tropical Freeze, it’s in its inability to make any meaningful usage of the Wii U hardware itself. You can play the game on the GamePad, which is a plus, but if you’re playing the game on your television set, the screen on the Gamepad is literally pitch black, and has no usage whatsoever. Besides that, the only real things to complain about are some long load times and the lack of variety in the bonus stages (all of which are simple variants of “collect the bananas” as opposed to the wider variety of mini-games found in the DKCs of old).