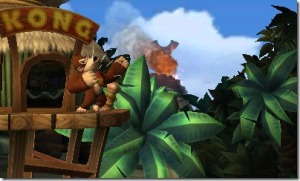 Donkey Kong Country Returns was one of the best games to grace the Wii’s library. The platforming was great, the visuals and music were pleasing to the eyes and ears, it had some of the best level design in years, and it was tough as nails. If there were any notable faults to be had, it was that the Wii version kind of shoehorned some motion-controls to certain game mechanics (rolling, ground-slapping, and the admittedly superfluous blowing mechanics), and they didn’t mesh into the rest of the game.

Luckily, that’s no longer a problem on the 3DS port, as any previously motion-controlled actions are now dictated by the X and Y buttons on the handheld (along with the appropriate directional presses on the control pad), which better translates with the rest of the gameplay.

The 3DS version of DKCR is, for the most part, a faithful recreation of the Wii original, but it does have some new features to boast of its own. The game now includes a “New Mode,” which is essentially an easy mode for those who would find the original version of the game too difficult. The levels retain their edge, but the player is given a few additional means to help them progress through the levels easier.

In New Mode, Donkey Kong and Diddy both have an additional heart than in the original mode. Cranky Kong also supplies new items in his shop to give players a little boost: Green Balloons can bring DK back from a fall into a bottomless pit, DK Barrels allow Donkey Kong to summon Diddy at any time (even on levels where he normally doesn’t appear), and the Crash Guard grants a limited-use shield in the mine cart and rocket barrel stages. Additionally, DK can bring up to three of Cranky’s items into a level at a time, as opposed to the one item per level nature of the original mode.

The New Mode will certainly come recommended to those who may not have the best platforming skills, but the original mode still gets my vote as the better way to play the game.

Another new addition in this 3DS version are eight brand new secret levels that can be played in either the original or new mode of the game. These new levels keep true to the spirit of the original game and bring their own inventive challenges to the mix.

One unfortunate setback of the 3DS version are the visuals. While the environments and animations are still vibrant, at times (primarily when DK is further in the background), the game can get a little blurry, which makes things a little more difficult than they need to be. The 3D effects also seem to be a little bit of a missed opportunity. DKCR had a strong emphasis on the depth of the foregrounds and backgrounds back on the Wii, but that never seems to reflect in any additional way in the 3D capabilities of the 3DS.

The minor gripes of the original remain: The bonus stages are a bit too repetitive, Rambi the rhinoceros is an underutilized gameplay element, and the music, while solid, is a bit of a disappointment given the precedent of the series. The soundtrack relies too heavily on remixes from the original Donkey Kong Country, and the remixes don’t match up to the originals.