Despicable Me is not the most ambitious of animated films. It’s more interested with simple slapstick and humorous scenarios than it is with telling a compelling story. And that’s perfectly okay, as Despicable Me seems to aspire more to being a cartoon than an animated masterpiece. In this sense, it succeeds.

Despicable Me is a fun movie. Its ‘hero’ is Gru (Steve Carrel), who is in fact a James Bond-style evil genius. He’s not entirely good at his job, as his fellow super villains seem to outperform his every last villainous scheme. When a rival villain steals the Great Pyramid of Giza – a criminal act described as “making all other villains look lame” – Gru decides to up his ante by hatching a plot to steal the moon itself.

Through a series of events, Gru also finds himself adopting three young girls from an orphanage; Margo, Edith and Agnes, which might just have him rethink his villainous life choices.

The story never attempts to break any conventions, but again, this is a film primarily about the laughs. It does include enough heart and wit to prevent it from simply being cartoonish nonsense, but it’s perfectly content with its simplicity. It doesn’t seek to have the heavy emotional aspects of an animated classic, it just wants to have a good time.

It would be hard not to have such a good time with a movie like Despicable Me. It’s unpretentious, and it’s more slick than snarky. Gru himself is a likable enough guy, he’s only a villain because he wants to win an award, not to cause any real damage. His adopted daughters are cute without ever becoming too obnoxious (unless it’s the butt of a joke, of course), and Gru’s army of Minions – yellow, stubby-shaped, gibberish-speaking… things – are a constant source of hilarious nonsense. 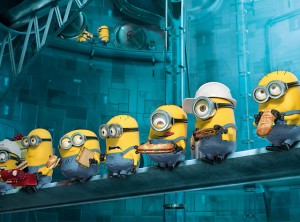 What Despicable Me lacks in ambition it makes up for in simple fun. It’s not waging its fingers at anybody and it never bombards audiences with pop-culture references, it only ever relies on its own hilarity to provide a good time.

If you go into Despicable Me hoping for a Toy Story or Finding Nemo, you may be disappointed. But if you’re a fan of the likes of Looney Tunes or Spongebob Squarepants, than Despicable Me should provide similar delights, but with just a tad more heart and sentiment to it.

Despicable Me takes the laughs, thrills and fun of a Saturday morning cartoon and successfully creates a feature length film out of them. It boasts colorful animation and cartoony character designs, which compliment the movie’s rambunctious attitude. Despicable Me never aims to be anything more than what it is, and what it is is a sweet, simple and delightfully sugary good time.