Since the early 2000s,  more and more film award shows and committees have been introducing awards for animated films. The Oscars now have the Academy Award for Best Animated Feature, an award which was later replicated by the Golden Globes, the BAFTAs and the Japan Academy Prize (Japanese Academy Awards). The up side to this is that it finally gives these award shows the opportunity to acknowledge animated features, which have been notoriously ignored in the past. The downside is that these awards often come as something of a token, as animated films are rarely even nominated for any other awards on these shows (lest they be for music or songs), despite whatever critical acclaim and admiration these animated films have received.

But every once in a while, the people behind some of these awards manage to overcome their biases, and there are some animated films that have actually won Best Picture awards and the like from some award presentations. I’ve given up hoping that the Oscars will some day crown an animated film with their top prize – considering only three animated films have ever been nominated for it (already a bit iffy), and that none of them were taken seriously as contenders – but that doesn’t mean others haven’t acknowledged the merits and timeless appeal of animated movies.

The following is a short list of some of the animated films that proved they could not only go toe-to-toe with live-action films at award shows, but even overcome their competition. Keep in mind that this is merely a short list of examples. I’m mainly focusing on the animated films that won the big awards at more prominent award shows, so there are probably a few others I’m missing. I’m also not including various critic awards, since it’s been long-established that critics enjoy animated films just fine, but award committees are tougher to win over.

So without further rambling, here are some of the exceptional animated films that overcame the odds, and won Best Picture awards that are usually reserved for live-action films.

Hayao Miyazaki’s tale about two girls who meet a magical forest spirit is one of the most beloved Japanese films of all time. It is also the earliest animated film I can think of that nabbed a Best Picture award over live-action competition, winning the Mainichi Film Award for Best Film. What makes this win all the more notable is that the Mainichi Film Awards already had a long-established animation award (they now have two, the older of which now going to smaller features and the newer going to big budget animations). Totoro won their animation award, and then went on to win the big prize as well. Well deserved.

While Disney’s Beauty and the Beast was the first animated film to be nominated for the Academy Award for Best Picture, it became the first animated film to win the big prize at the Golden Globes. Beauty and the Beast remains one of Disney’s most charming features, and with a wonderful soundtrack to boot. How could it not win the musical category?

I may not be the biggest fan of The Lion King, but no doubt the film has a very strong appeal to many viewers, as is evidenced by its repeating of Beauty and the Beast’s win for the Golden Globe Award for Best Picture. It was the highest-grossing animated film ever at the time, and its Golden Globe win only capped off its success. 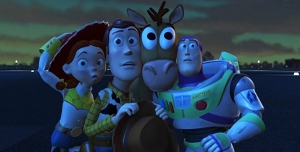 The third animated film to win the Golden Globe for Best Picture is also, sadly, the last. Shrek, Finding Nemo and The Incredibles would all get nominations, but after the Golden Globes established their Best Animated Feature category, their rules state that any films nominated in the animation category are ineligible for either of the Best Picture awards (the least they could have done was named the newer award “Best Picture – Animated“). But at least this trend went out on a high note, as Toy Story 2 is one of Pixar’s best.

Hayao Miyazaki’s masterpiece, Spirited Away, remains the highest-grossing film in Japanese history to this day. It also became the second animated film to be nominated for and win Best Picture at the Japanese Academy Awards (sadly, since the inception of the Japan Academy Prize’s Animation Award a few years later, no other animated film has been nominated for Best Picture).

Spirited Away followed suit with Totoro and Mononoke by winning the Mainichi Film Award for Best Film (where it also won the Animation Award, Best Director for Miyazaki, and Best Music for Joe Hisaishi). Spirited Away also became the first (and only) animated film to win the big prize at the Berlin International Film Festival. This string of awards would culminate with the Oscar for Best Animated Feature, giving that award some depth and credibility in its early days.

When it comes to animated films winning live-action movie awards, Spirited Away is the big dog in this league of animated all-stars.

Given the huge popularity of the Wallace and Gromit characters, it still comes as a surprise to some that the duo have only starred in a small handful of short films and one feature film. But that one feature film is the only animated movie to win the BAFTA award for Best British Film. Not bad for an absentminded inventor and his mute dog.

Frozen has taken over the world (and rightfully so, it’s so lovable), becoming the most successful animated film ever made, and winning numerous awards for Animated Features and for its music. But Frozen’s impact has undoubtedly been biggest in Japan, where it ranks as one of the country’s highest-grossing movies (it was the first film since Spirited Away that actually contested Miyazaki’s box office champ). It broke all home video records in Japan (overtaking Spirited Away in this instance), and it has etched its way into Japanese popular culture. It shouldn’t be too surprising then that it also became the first animated film to win the Japanese Academy Award for Best Foreign Film (previously, Toy Story 3 was the only other animated nominee in the award’s history).

The Oscars apparently couldn’t get over themselves and give Frozen a Best Picture mention, but the Japanese Academy Awards made up for it by acknowledging the film’s unprecedented appeal.