When Tarzan was released in 1999 it marked the final chapter in the Disney Renaissance era. The critical and commercial success Disney attained with The Little Mermaid in 1989 that continued throughout the 90s would soon give way to the booming scene of Pixar, Dreamworks and CG animation. For the next decade Disney would enter another slump, only regaining their dominance in animation in recent years. So while Tarzan marked the end of an era, it can at least boast that it ended that era on a high note.

Tarzan’s story takes place in a rainforest on the coast of Africa, where a couple and their infant son have taken refuge after escaping a burning ship. The couple is eventually killed by a leopard called Sabor, but the infant is saved by a gorilla named Kala (Glenn Close), who raises the human infant as her own. Kala lost her own child to Sabor, and immediately becomes attached to the human child, who she names Tarzan.

Tarzan (Tony Goldwyn) grows up among the apes, accepting them as his own kind and adopting their behavior, even though the troop leader Kerchak refuses to accept him as one of their own. But Tarzan’s world is turned upside down when a trio of humans, including the beautiful Jane Porter (Minnie Driver) and plotting Clayton (Brian Blessed), make their way into the jungle.

The film tells a good, well-paced story that benefits greatly from its hero and his interactions with the two worlds that come into his life. 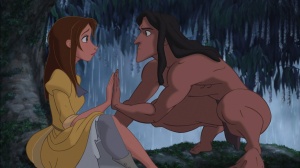 Tarzan himself is one of Disney’s better male heroes, with his curiosity and interest about the world around him making him just as curious and interesting to viewers. His relationship with Jane feels more earnest than a lot of Disney romances, since it’s built more on their fascination with each other, instead of the usual ‘pretty girl meets pretty boy’ setup of Disney fare. But it’s the love Tarzan shares with his adoptive mother Kala that provides the film’s most moving moments.

Clayton is an underappreciated villain. He doesn’t always have the strongest presence, but the moments where he manipulates Tarzan’s naivety make him an effectively despicable member of the Disney villain canon. And the booming vocals of Brian Blessed help enrich his villainous personality.

On the downside, Tarzan’s two sidekicks, a gorilla named Turk (Rosie O’Donnel) and an elephant named Tantor (Wayne Knight) feel a bit tacked on. The filmmakers seemingly added them since, well, that’s what Disney films do. But the movie could have done just fine without them.

Tarzan has a good soundtrack, even if it’s the only film from the Disney renaissance (besides The Rescuers Down Under) that doesn’t even attempt to be a musical. None of the songs are sung by the characters (with the exception of a single verse in its centerpiece number), instead being performed in the background by singer Phil Collins.

“You’ll Be in My Heart” is the film’s defining musical piece, and is a sweet lullaby that expresses Kala’s love for her son Tarzan. “Two Worlds” and “Strangers Like Me” are more upbeat and not quite as good, but follow the trend of briskly moving the story forward without distracting from it. “Trashin’ the Camp” on the other hand, is a bit of a mess, as it attempts to be the ‘fun’ song of the movie, but lacks any real lyrics or a catchy melody in order to live up to the rest of the tracks.

However, it’s the animation that might be Tarzan’s biggest highlight. By this point in Disney’s successful run, the studio was able to deliver their finest visuals. Tarzan is exquisitely animated, with complex, fluid character movements and backgrounds so lavishly detailed they come close to Studio Ghibli’s work.

Tarzan also proved something of a breakthrough for animation, as computers were used to enhance the hand-drawn visuals in such a way to give a greater interaction between characters and environment. The scenes with Tarzan surfing across trees are absolutely stunning in motion. In terms of its complexity and execution, Tarzan may rank as Disney’s best-looking hand-drawn animation.

When all is said and done, Tarzan was a fitting close to the Disney Renaissance, with only a few bumps in its soundtrack and sidekicks. But its story provides strong entertainment and emotion, complimented by some of the most captivating visuals Disney has ever conceived.