Although Captain America: The First Avenger is, in a lot of ways, a pretty by-the-books super hero origin story, it gets a lot of extra brownie points for two reasons.

The first is the setting. Placing a super hero story in the midst of WWII is a simple stroke of genius. It turns the origin story into a period piece, and feels far more refreshing than your usual run-of-the-mill super hero movie.

The other reason is Captain America himself. Steve Rogers is made into an immensely likable character simply for being a nice guy who wants to do good for the sake of good.  In this day and age of “anti-heroes” and “dark and edgy” stories, seeing a hero so void of cynicism is as refreshing as the setting.

Plus, we also get some great action scenes and good special effects (like how the early parts of the film use digital effects to make Chris Evans look like he has the build of Squidward Tentacles). Not to mention a fun (and underrated) villain in Red Skull.

Iron Man was the first film in the Marvel Cinematic Universe, and many still hail it as the best. It does put up some good arguments to such claims, with terrific action scenes and visual effects that still hold up.

Best of all, Robert Downey Jr. brought Tony Stark to life in a way few super hero movies could imagine. You could even argue that it’s more fun to watch Tony Stark’s bantering and belittling of everyone around him than it is to watch Iron Man fight the bad guys.

Iron Man is just a fun movie to watch through and through. It set the bar pretty high for the Marvel Cinematic Universe right out the gate. Sure, it was released the same year as The Dark Knight, which means it could only ever hope to be the second best super hero movie that year, but Iron Man still did pretty much everything it set out to do pretty well.

It established the MCU with its quiet mentions of other characters and, of course, the after credits sequence. It lifted Iron Man from being “one of those comic book super heroes” into a mainstream character akin to Spider-Man. Best of all, it was a good movie.

If only the sequels could have kept up.

After Iron Man 3 and Thor: The Dark World got Phase Two off to a miserable start, I feared that The Avengers had left the Marvel Cinematic Universe all out of gas. Thankfully, Captain America: The Winter Soldier showed up and Marvel movies were good again.

Granted, the WWII setting of the first Cap was left behind, but Winter Soldier uses the change of setting to its advantage. It both separates itself from its predecessor and capitalizes on the decades-long jump in setting to add some character development to the equation. It’s easy to sympathize with a hero who’s lost in time.

The Winter Soldier also takes a surprising turn for the serious. It may not reach the levels of drama of The Dark Knight, but it’s as close as the Marvel movies have come. Its plot has twists and turns, it has a few interesting (if predictable) spins on its villains, and a genuinely more sophisticated attitude than any of the previous MCU movies (while still retaining a sense of humor).

The movie also boasts impressive visual effects (sans the digitally aged Peggy Carter…what were they thinking?) and some of the best action sequences yet in the MCU.

Captain America: The Winter Soldier got things back on track in a big way. 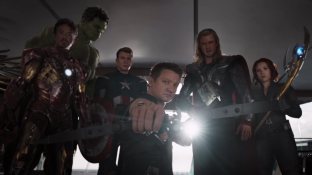 The Avengers was the apex of Marvel’s Phase One, bringing together the heroes from the previous MCU films plus some other characters who don’t have super powers that we’re supposed to believe are on equal footing with the others.

The Avengers can be a bit silly, as the film brushes aside potential character development too frequently, there are some plot elements that needed more fleshing out (exactly how did Loki get to Earth?) and there’s some clunky dialogue (“There is no stopping it, there is only… the war!”). But when it comes to pure, unadulterated, I-feel-like-a-twelve-year-old-boy-again fun, it’s hard to top The Avengers.

Fun is the key word. The Avengers has extravagant action set pieces, a bombardment of fancy visual effects, humorous one-liners (“That man is playing Galaga!”), and lots and lots of fan service. And it’s all brought together by a terrific assortment of super heroes.

In a quietly brilliant creative decision, the movie reuses an established villain in Loki. This leaves The Avengers more time to focus on the heroes banding together, and less time on introducing a new foe and needing to explain why he’s a threat to all the super heroes.

Like Iron Man in 2008, The Avengers would end up being ‘only’ the second best super hero film of its year (after the increasingly underappreciated “The Dark Knight Rises,” which told a better story), but no doubt it’s among the most fun movies released in a long time.

Here’s hoping Age of Ultron is as fun.

1: Guardians of the Galaxy 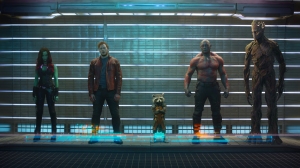 Yep, here it is. Guardians of the Galaxy at number one.

Unlike pretty much everyone else on the internet, I tend to not be a fan of movies that “don’t take themselves seriously.” That’s not to say that I dislike comedy, but I enjoy honest storytelling, and don’t understand why nerds and internet types feel the need to punish more seriously-toned movies for being serious. Heaven forbid a movie *gasp!* cares about the story it’s trying to tell!

With that said, Guardians of the Galaxy found a brilliant middle ground. It has an offbeat sense of humor that compliments an oddball cast of characters: Peter Quill – AKA Star-Lord – is a man who prides himself a notorious outlaw even though no one knows his name. Gamora is an alien assassin. Drax is a powerful warrior who takes everything literally. Groot is a walking tree. And Rocket is a talking raccoon.

Yet, despite the ragtag nature of the characters, the film is wise enough to take some time to get to know each of them (yes, even the raccoon). It doesn’t toss aside seriousness because the characters are goofy and the dialogue is funny. It treats its misfits heroes as people and its story as something important (there are even some emotional moments involving Quill’s past). Guardians of the Galaxy understands both comedy and caring.

The only downside is that the villain, Ronan, is pretty flavorless. The heroes are likable and entertaining enough to not make it too big of an issue, but just imagine if the Guardians of the Galaxy were paired up with a villain with as much personality as Loki. It’d be a perfect combination!

Anyway, Guardians of the Galaxy not only succeeds with entertaining characters, a fun story and humorous writing, it also has some of the best sci-fi action this side of the Star Wars, and top-notch visual effects.

Guardians of the Galaxy takes pretty much everything we’ve come to love from the MCU movies (Stan Lee cameo included), combines it with a Star Wars setting and style, and adds a quirky sense of humor into the mix.

As it stands, Guardians of the Galaxy is the very best of the Marvel Cinematic Universe.