When the Nintendo DS was first released, many of its games were little more than technical displays of the DS’ features. One such game was Electroplankton, which ranks among the strangest titles Nintendo has ever made.

That’s not to say it’s strange in the usual Nintendo sense of whimsy and surrealism. Rather, Electroplankton is a strange game because it’s hardly a game at all. It’s a title that allows players to tamper with nine different sound tests (each categorized by a different Electroplankton) to create unique melodies and sound effects. You can even record your own voice.

The way the game goes about these “mini-games” can be creative: One Electroplankton allows you to record voice samples to four fish-like creatures, which then play the samples back in unison as they swim by. Another has players change the trajectory of arrows, and as four different colored Electroplankton follow them, they create different melodies. These are among the more fun experiences in Electroplankton, but to say that the fun is short lived is an understatement.

Other Electroplankton games are so simplistic it’s close to shocking that they got their own category, instead of complimenting another: One Electroplankton has five records that the player can spin with the stylus to create (admittedly lovely) sounds, but spinning these records one way or another can only hold one’s interest for so long. Another game has players tapping the touchscreen to make Electroplankton eggs appear, which hatch seconds later to produce sounds. It’s games like this that require so little input they’d be better suited among WarioWare’s myriads of micro-games.

Possibly the game’s biggest downside is that you can’t save any of your work. Even if you’ve managed to create a cool and catchy little musical number, you’ll lose it as soon as you hit the B button and exit the mini-game in question. It’s a baffling piece of game design. Electroplankton is a game about creating music and sound that doesn’t let you keep any of your creations. 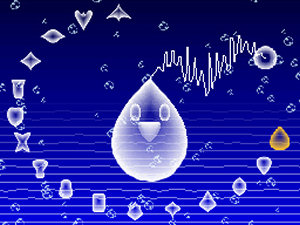 At the very least, Electroplankton has some interesting aesthetics going for it, with its visuals being colorful and almost ghost-like, and its sound design is appropriately catchy (one of the more memorable Electroplankton lets you tamper with the invincibility theme from Super Mario Bros.). Its look and sound is unique enough that Nintendo’s decision to adapt them into a Super Smash Bros. stage isn’t too surprising.

The problem is that Electroplankton, despite its honest intentions at making a creative and soothing gaming experience, is just far too shallow to succeed. Perhaps with a host of additional Electroplankton or the ability to combine the existing ones, the game may have been a little more hefty. But Electroplankton ultimately feels flat, and the inability to save what you create just makes it sting all the more. Even in its day, Electroplankton felt a bit unfulfilled. Today it would barely even pass as an app on the 3DS’ home menu.