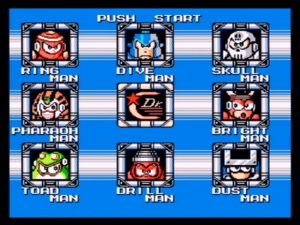 Mega Man 4 is a better game than its reputation might suggest. It retains much of the fun gameplay and sharp level design of its predecessors, and it even adds a good dose of narrative to the equation. But Mega Man 4 does have its faults – primarily in its lack of creativity and a gameplay change that fans still debate today – that prevent it from reaching the heights of the series’ finer entries.

The aforementioned gameplay change is Mega Man’s new Mega Buster, which allowed the Blue Bomber to charge his arm canon to shoot a more powerful blast. The charged shot made Mega Man stronger than ever, but it also came at a price, as it relegated the Robot Master abilities to little more than window dressing.

Mega Man still gains new powers from the Robot Masters he defeats, and like before their powers are effective against one another in an elaborate game of rock-paper-scissors. In the previous Mega Man games, the Robot Master abilities also found use in the stages themselves, but in Mega Man 4 they are useful almost exclusively in boss battles (some of which feel unfairly difficult without the correct power), as the new Mega Buster subverts them in the overall gameplay.

The Mega Buster was Mega Man 4’s thing. It’s understandable that Capcom would want to play it up. But they seemed to get a better hang of balancing it with Mega Man’s other powers in subsequent games. Mega Man 4 is so enthusiastic about its new toy that everything else in its toybox becomes an afterthought. Most of the Robot Master abilities even feel recycled from the previous games.

Similarly, Mega Man’s robot dog Rush doesn’t gain any additional moves, sticking to the same three he had in Mega Man 3 (with the Rush Jet strangely feeling clunkier to control than it did in its debut). The Mega Buster was at the front and center of Mega Man 4. On its own that’s not such a bad thing, but it feels like Capcom emphasized it at the expense of being creative elsewhere.

That’s not to say that Mega Man 4 isn’t fun, however. This is still Mega Man, and you’d be hard pressed to find an entry in the core Mega Man series that wasn’t great to play. The run, jump and shoot simplicity of Mega Man is left intact, complimented by some great level designs that build on their gimmicks as you progress through them. Dive Man’s stage, for example, tests players’ underwater jumping abilities, only to test them further once the water levels fluctuate.

The stage design remains challenging, and will push even Mega Man veterans to their limits. At its best it’s on par with Mega Man 3’s difficulty, at its worst it can feel a bit frustrating. In short, if you’re new to Mega Man, you might not want to start with 4.

One of Mega Man 4’s highlights is its added narrative. Yes, it’s a simple plot, but Mega Man 4 presents its story in some fun ways. An opening cinematic explains the fall of Dr. Wily and the rise of a new villain, Dr. Cossack, giving the game a more fleshed-out setup. There’s even a fun (though entirely foreseeable) plot twist! Again, it’s nothing spectacular, but it gives Mega Man 4 a charm of its own.

The plot twist also means that Mega Man 4 gets a second castle segment. After Mega Man defeats the eight Robot Masters, he moves onto Dr. Cossack’s castle. Then, after besting that castle, Mega Man moves onto another castle! This extends 4’s length almost to that of Mega Man 3. Though Mega Man 3’s twist of additional selectable stages may be more fun, you have to give Mega Man 4 credit for including a twist of its own.

Visually, the game looks similar to Mega Man 3, but that’s not exactly a bad thing. The graphics remain bright and colorful, though the character designs have taken a notable step down, with most of the Robot Masters’ designs feeling less inspired than those in the previous games (with the considerable exception of Skull Man, who remains one of Mega Man’s coolest foes ever). The soundtrack is still a highlight, though its tunes aren’t quite as memorable as those in the previous games.

Overall, the appeal of Mega Man 4 largely depends on if you’re looking at it for its own merits, or stacked up against the other entries in the iconic series. On its own, Mega Man 4 is a NES title that has aged well, boasts some great level design, and provides a satisfying adventure. But Mega Man 4 also lacks the inventiveness, balance and variety of Mega Man’s better titles.