The Avengers: Age of Ultron is now one of the highest-grossing movies all time. That’s not too surprising, since it seems like all a movie needs to do to make such a claim these days is have a lot of super heroes and visual effects. But, Age of Ultron is an enjoyable movie, which is more than you can say about most billion-dollar movies. Age of Ultron is more entertaining than more cynical nerds would want to admit (“I found one tiny flaw so now everything about it sucks and it betrayed the comics!”), but it also has its share of problems. Here are the things I loved about Age of Ultron, followed by the things I, well, didn’t.

*Be warned: spoilers ahead!*

It doesn’t take long for Age of Ultron to get to the action, as the movie begins in the midst of a battle between the Avengers and Hydra forces. From that scene all the way up to the finale, the action sequences in Age of Ultron are all fun and very satisfying for any action fan. The best part is that they rarely let up, with most of the action scenes going uninterrupted for minutes at a time. There’s never a dull moment when the Avengers take to the battlefield.

Ultron is a fun villain 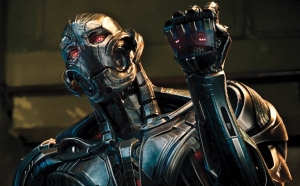 I have to admit, it took me two viewings of Age of Ultron for the villain to win me over. Maybe I’m just too used to Loki (who is still the better villain) after watching the first Avengers so many times over the last three years, but I found Ultron underwhelming the first time around.

Thankfully, I saw the film a second time and I could appreciate this movie for what it was, without the shadow of the first movie hanging overhead. This second time around I greatly enjoyed the Ultron character, as he was both a worthy villain to the Avengers (he’s his own army!) and he was given a good dose of personality and humor thanks to James Spader’s performance.

I only wish the character had a better introduction into the film (more on that later), but otherwise Ultron is one of the Marvel Cinematic Universe’s better villains.

As is the case with most of these Marvel movies, Age of Ultron loves to give little (and not-so little) hints about upcoming movies. Though Ultron takes the nudges and winks a step further than most Marvel movies, going so far as to introduce an upcoming villain for Black Panther (you didn’t think they’d waste Andy Serkis on a cameo, did you?), and give insight to what Captain America and Thor will be doing next. Sure, it can get a little fan service-y, but for the most part Age of Ultron’s insistent referencing helps establish the Marvel Universe as a complete, connected fictional narrative, and drops some fun insight into upcoming films.

A good sense of humor

With the exception of Guardians of the Galaxy, The Avengers was probably the funniest film in the Marvel Cinematic Universe, and Age of Ultron carries that torch proudly. There’s a lot of jokes aimed at Captain America’s goody two-shoes personality, Tony Stark is still Tony Stark, and even Ultron gets a good deal of funny moments.

But, Age of Ultron is also smart enough to not let the comedy become overbearing. When serious events occur, the characters tone down the comedy appropriately, which keeps the story alive and prevents it from becoming a joke. It’s a funny movie, but it knows when not to be as well.

The redemption of Hawkeye

Remember how Hawkeye was a brainwashed zombie for the first half of The Avengers? Age of Ultron remembers, so it takes special attention in rectifying the original’s misuse of the character by giving him a good deal of screen time, backstory and development. Granted, this comes with the baggage of some character retconning (more on that in a bit), but at least it acknowledges the character’s potential and doesn’t completely throw him to the side like the first movie.

There’s no way around it, the “romantic” subplot between Natasha Romanoff (AKA Black Widow) and Bruce Banner (AKA The Hulk) is downright goofy. And that’s in its best moments.

First thing’s first, why does Black Widow even need to be in a romantic angle with a fellow Avenger? I’m not against the idea of her being in a relationship (though why does it seem she’s only in one because she’s the female Avenger?), but seriously, the Hulk?!

The first Avengers movie hinted at a possible romance with Hawkeye, and while that potential relationship may have been a tad predictable, it at least deserved to be acknowledged in Age of Ultron. Instead, Black Widow and Hawkeye’s relationship is completely retconned so that Hawkeye has a family and he and Natasha are simply “best friends.” Again, their potential romance may have fallen into cliche, but just retconning it out of existence and pretending like it was never a thing is just kind of insulting to the fans’ intelligence.

Then remember her possible romance with Captain America in Winter Soldier? Yeah, well, that’s written off as well. It was “just flirting” according to Age of Ultron. Again, the retconned relationship just feels cheap. I’m not one for character shipping (seriously, it’s annoying people!), but surely I’m not the only one who thought both of those potential couple also had way better chemistry than this Hulk/Black Widow pairing.

But I’m rambling. The worst part of this whole character couple is that it undoes much of the character development Black Widow had in Avengers and Winter Soldier. She went from the cool,butt-kicking female Avenger to… The Hulk’s love interest. And that’s basically her role in the movie. That and damsel in distress. Sigh…

Speaking of underutilized female characters, what exactly does Agent Maria Hill do in this movie? She was introduced in the first Avengers as a possible replacement to Agent Coulson, who died in said movie (but not really or something). But she just kind of shows up in Age of Ultron, reminding everyone that she exists. At the very least, she isn’t involved in any Hulk romance, but if you’re going to introduce this character can she at least do something other than just show up?

There are too many characters

Perhaps the reason Maria Hill isn’t able to do much is because she has so little room to do it, as there are just so many characters that the film is juggling it’s hard for many of them to get the attention they deserve.

Granted, some people will say “it’s the Avengers, the need an expanding team.” Okay, I’ll give you that. But making a bigger team shouldn’t have to come at the expense of characters. The likes of Iron Man, Captain America and Thor all have their own franchises going on, so they have it easy because we’ve been given the chance to see more of them. It might have been to the benefit of the new characters introduced in Age of Ultron if they too were properly introduced in a previous movie.

Age of Ultron wants to dedicate time to all the returning characters while also introducing not one, not two, but three new members of the team. And let’s not forget we also have to bring Ultron into the picture. Age of Ultron, while fun, ends up working with more than it knows what to do with. Ultron’s introduction ends up feeling rushed and sporadic as a result, while the Vision’s debut in the series is even more so. Then there’s Scarlet Witch and Quicksilver, who can basically be summed up as “bad guys then good guys with an obligatory backstory.”

It’s not that any of these characters are bad, but Age of Ultron often doesn’t know what to do with them.

Only the most conveniently expendable character dies…again

Look, I understand that Marvel has a franchise going on here, so they can’t just kill off characters all willy-nilly. But these Avengers movies are getting into a bad habit of only killing off the single most expendable character. I know a lot of fanboys like to think that Agent Coulson’s death in the first Avengers film meant something, but the character had, what, all of ten minutes of screen time in three movies? It’s not exactly like killing him off would shake the series to its core.

Doing it once is bad enough, but Age of Ultron goes ahead and repeats this act, killing off the single character we’ll miss the least. Again, I understand why you can’t just kill Iron Man or something. But as it stands the Avengers movies feel like they’re trying too hard to add drama by killing off a character, but are unwilling to take it to the lengths it needs to actually make us care. Instead of thinking “oh no, not him!” when the Avengers kills a character, you just kind of think “Well of course it’s him, he’s expendable.”

Still, I suppose it beats killing off characters only to constantly bring them back like in the comics.

Okay, my rantings here are done. While I ultimately think The Avengers: Age of Ultron is a good, solidly entertaining super hero film, it can be a bit of a mess in some areas. Despite its flaws, Age of Ultron is still fun enough to keep me interested in the Marvel Cinematic Universe. And ‘interest’ is more than I can say about a lot of other movie franchises these days.

One thought on “The Good and Bad of The Avengers: Age of Ultron”