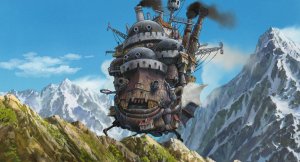 I was going to celebrate this milestone with a full on review of Howl’s Moving Castle, but I think I’ll get to that another time. I figured I’d just detail some of my personal experience with the film for now.

It’s important to note that Hayao Miyazaki is my favorite filmmaker. I’ve loved My Neighbor Totoro ever since I was a little kid, and have only grown to love it more through the years. It was with Spirited Away though, that I actually found out who Miyazaki was. While Spirited Away and Totoro sit at the peak of my list of Miyazaki films, Spirited Away introduced me to the director’s other work, and I’ve fallen in love with all of them (some more than others of course, but the man never made a movie that wasn’t great).

Leading up to Howl’s June 10, 2005 release, I couldn’t have been more excited. It was the first Miyazaki film to be released theatrically since Spirited Away, and I was counting down the days like a kid and Christmas.

I remember it was the first movie I saw at the El Capitan Theater in Los Angeles, and it was awesome! I’ve seen a number of movies there since, and have tried to see every major Disney animation, Pixar film and Studio Ghibli production there when possible. The theater gave a nice, classic movie atmosphere, and the crowd was pretty enthusiastic as well, so that always helps. Then there was the organ player playing classic Disney songs, so that made it all that much cooler. The build up itself was so great that I can forgive the poor assortment of trailers that included the likes of Chicken Little and Valiant (it was a CG movie about pigeons or something).

Then the movie started, with the big Studio Ghibli logo of Totoro’s mug engulfing the entire theater, and it was glorious. I absolutely loved the movie, from its striking imagination, beautiful animation, fun characters and everything in between, it was a great time. I also think that Disney’s dubs of the Ghibli movies are excellent (particularly the theatrically released ones), and Howl was no exception.

Of course, as time has passed I now see Howl’s Moving Castle as one of Miyazaki’s “weakest” films, since Sophie is probably the least interesting Miyazaki heroine by some margin, and the subplot with the whole war thing seems to overtake the main story during the third act. But using the term “weakest” when referring to an unparalleled canon of films like Miyazaki’s is a very relative thing. Despite not being up to par with most of Miyazaki’s other works (I feel it’s on par with Nausicaa, but that’s just me), Howl’s Moving Castle is still a great animated film.

But that’s beside the point. Like I said, I’ll review it another day. The fact of the matter is that that initial screening I had of Howl’s Moving Castle remains one of the most fondly remembered moviegoing experiences of my life. I had a great seat, the place had a great atmosphere, the crowd was great, and most importantly, so was the movie. It’s experiences like that why I love movies so much.

Miyazaki made two more films after Howl’s Moving Castle and has since retired (though never say never, it’s not the first time Miyazaki has called it a career), and Studio Ghibli itself seems to be on the brink of closure. Whether or not Ghibli has come to an end though, the studio has a peerless legacy in the world of animation. My experience watching Howl’s Moving Castle on that June day ten years ago is but just one of the reasons why they’ve made such an impact on me.