The film tells the same story as the book. In a jungle called Nool, an elephant named Horton (Jim Carrey) finds a clover on the ground. Atop this clover is a small speck. Much to Horton’s surprise, his elephant ears can hear a faint voice coming from the speck. As it turns out, the speck is, in fact, its own little world. The people of this world are the microscopic Whos, who live in the city of Whoville. The mayor of Whoville is Ned McDodd (Steve Carell), who can communicate with Horton from a device on his roof.

The fragile world on this speck is now in jeopardy, as even the slightest nudge of the flower it sits on can cause massive earthquakes in Whoville, and Horton’s constant traveling can create severe changes in the weather. Horton then sets out to place the speck in a cave on Mt. Nool, the safest place in the jungle. 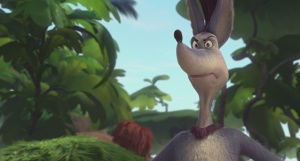 Things won’t be so easy, however. The self-appointed boss of the jungle, the aptly-titled Sour Kangaroo (Carol Burnett) resents things that go against the social norms of her jungle, and that includes animals believing that a speck could be a tiny world filled with people. Kangaroo is determined to see Horton give up his belief in this tiny world, and is even willing to have the speck destroyed to do so.

The plot is simple, but has a good message. The animation is colorful and vibrant, and brings the world of Dr. Seuss to life much better than its live-action predecessors. There’s even a segment that takes on a simplified anime look (though unfortunately, it comes with the usual mentality of anime parodies that all Japanese animations work like Speed Racer). The voice actors also bring the story up to date with a good sense of humor, though some incessant pop-culture references do clash with the nature of the original story. 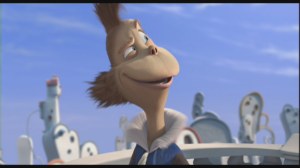 One questionable change to the source material is that Mayor McDodd now has 96 daughters and one son. The son ends up becoming a major character in the film, while all of the daughters are simply a recurring joke based around the sheer number of them. Dr. Seuss’ original book certainly wasn’t made exclusively for young boys, so it’s a bit of a mystery why the movie brushes aside most of its female characters (even McDodd’s wife only gets so much screen time). I’m not saying it needed to shoehorn any of the characters into bigger roles, but when all of McDodd’s daughters just add up to a big joke, while his sole son ends up playing such a pivotal role, it feels a bit thoughtless.

Overall, Horton Hears a Who is an entertaining movie that serves as a faithful recreation of a classic Dr. Seuss story. Not all of the jokes work to its benefit, with the movie being at its best when it isn’t trying to be a comedy. But it’s a fun and colorful ride that builds to a surprisingly suspenseful finale and, most importantly, it does its source material justice.