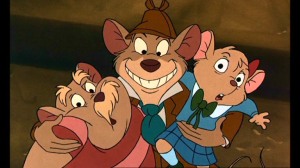 Although The Great Mouse Detective doesn’t rank as one of Disney’s most popular animated features, it holds a special place in the hearts of many fans and remains something of a cult classic. The 1986 animated film was more fun than other Disney movies of the time, like the bittersweet The Fox and the Hound and the dark and clunky The Black Cauldron. The Great Mouse Detective was a modest success, but its return to a more lighthearted nature ensured it was successful enough for Disney to see that their animation department was still viable, and helped open the door for the Disney Renaissance of the 1990s. Though it’s hard to rank The Great Mouse Detective with Disney’s better works, it remains a solidly entertaining entry in their canon nonetheless.

The Great Mouse Detective works like a Disney-fied version of Sherlock Holmes, with Holmes being replaced with a sharp and witty crime-fighting mouse named Basil of Baker Street. When a toymaker mouse gets kidnapped, his daughter Olivia Flaversham seeks Basil’s help to rescue him. They are joined by a portly mouse named Major David Q. Dawson, who fills the role of Dr. Watson.

Olivia’s father is being blackmailed by one Professor Ratigan (voiced by the legendary Vincent Price) as part of a scheme to overthrow the Queen of England (or the mouse equivalent thereof). Ratigan is Basil’s archenemy, so both parties see this case as a means to prove themselves the better mouse (though Ratigan is actually, as his name implies, a rat).

It’s a simple, straightforward plot, but it remains consistently entertaining throughout due to its fun characters and the way their personalities play off Sherlock Holmes archetypes. The movie also has some fun with the animal motif, with Ratigan punishing his minions who refer to him as a rat by feeding them to his spoiled pet cat, to name an example.

The animation is relatively simple for a Disney movie, as the studio was not at a place where they could afford their best production values at the time, but it still boasts fluid movement and stylized character designs.

The film doesn’t share the musical blood of its more famous Disney peers, but Ratigan gets a fun, sinister musical number, and even an additional background song (the filmmakers clearly knew they struck gold with Vincent Price voicing a Disney villain). Strangely, the only song that isn’t sung by the villain is sung by a showgirl at a shady tavern.

Overall, The Great Mouse Detective may not stand toe-to-toe with Disney’s best, but it provides an entertaining animated romp for kids that adults can also enjoy for its animation, homages to Sherlock Holmes and, of course, its charismatic, show-stealing villain.