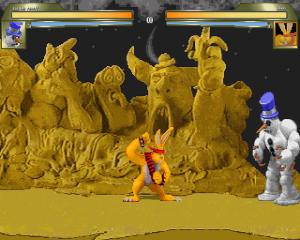 If you’re looking for forgotten fighting game franchises that probably should remain forgotten, it’s hard to top ClayFighter. The series holds some nostalgic value for some due to its unique art direction, which attempted to replicate the look of clay animation. But take away that one attribute and one thing becomes clear: ClayFighter is pretty bad.

ClayFighter 2: Judgement Clay – an annoyingly obvious parody of Terminator 2: Judgement Day – might not be the worst game in the series, but it does a good job at summing up its many shortcomings.

The most obvious of these shortcomings being the gameplay. This was a series that spawned in the wake of Street Fighter 2’s success, so there was a standard for the genre to live up to. But ClayFighter evidently missed the memo, and borrows none of the intricacies or depth of Street Fighter’s gameplay. Even the monotonous fighting of the original Mortal Kombat feels fleshed out by comparison.

ClayFighter simply took a popular genre, and added its own schtick to the equation (clay characters) and called it a day. It’s one of those poorly conceived fighters that seems to cater to button mashing as opposed to requiring any kind of strategies, combos, or anything that requires being thought-out. There are also some terrible balance issues, with some characters – namely the self-explanatory Blob – making the game much easier due to the outrageous advantages they have over others.

The characters are an odd assortment of cartoon characters: Bad Mr. Frosty is a snowman with an attitude, Googoo is a big, ugly baby, and Hoppy is a musclebound bunny who parodies Arnold Schwarzenegger, which puts him in that most played out of cliches of a cute thing being turned violent. These are just a few of the characters, who also have “evil” counterparts who can be unlocked. The game is clearly going for a kind of tongue-in-cheek sense of humor, but the characters are so charmless that the humor never really comes through.

I must admit that the clay-inspired character models still hold up pretty well. The character designs themselves aren’t too pretty to look at, but the game was pretty successful at mimicking the clay look through its limitations. Though Hoppy’s character model looks suspiciously less clay-like, which might be a sign of either a lack of caring or time with his creation.

ClayFighter 2: Judgement Clay is a hard game to recommend except for those who have the utmost nostalgia for it. Even then I’m sure those people probably have nostalgia for other games that are far more worth a revisit. “C2” just feels like a basic, rushed fighter that lacks any real creativity or depth. The graphics are fun to look at for a short time, but they can’t hide the shallow gameplay, unfunny sense of humor, poor balance, and general lack of fun.