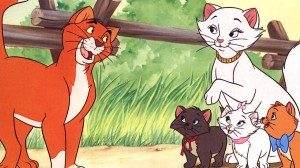 The 1970s were a rough decade for Disney’s animation output.  Following the death of Walt Disney in the late 60s, the next several years saw the studio at a loss of direction, with most of their animation output becoming pretty forgettable (with a couple exceptions) until the release of The Little Mermaid in 1989. The first of the 1970s lot was The Aristocats which, while not without some fun moments, feels all the more like a product of its rough time today.

The Aristocats tells the story of a family of cats who belong to a wealthy, retired opera diva. The mother cat is Duchess, and her three kittens are named Marie, Berlioz and Toulouse. After their wealthy owner prepares her will, wishing to leave her fortune to her cats, her conniving butler, Edgar, seeks to get rid of the cats so he can inherit the fortune himself. 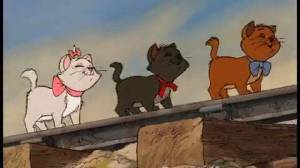 Edgar gives the cats some sleeping pills and plans to abandon them out of town. He’s stopped midway by a pair of dogs, but by this point the cats are far away from home and lost. Duchess and her kittens later meet up with an alley cat named Thomas O’Malley, who serves as their guide in their adventure to find their way back home.

The plot is simple, and not entirely original, feeling like something of a retread of Lady and the Tramp but with cats instead of dogs. It also lacks the more timeless charm of Lady and the Tramp, with the characters here feeling stereotyped in both gender and race (the less said of the Asian cat who plays piano with a pair of chopsticks, the better).

Animation-wise, The Aristocats continued Disney’s knack for appealing character designs and fluid movement, but it doesn’t catch the eye nearly as well as the studio’s better offerings. The songs are also a bit weak. Even the movie’s signature tune “Ev’rybody Wants to be a Cat,” while kind of fun, ends up feeling pretty unmemorable. 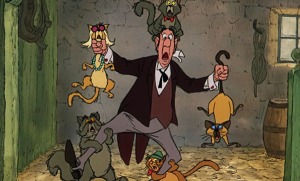 The Aristocats still has its good points, with the main characters being cute and charming, and some fun action scenes and comedic moments. But today, it’s a bit difficult to recommend The Aristocats when compared to a good heft of the Disney canon. Kids might still find it entertaining, but it’s also easy to imagine them preferring most other Disney movies with better stories, songs and animation. Compared to a lot of Disney’s animations, The Aristocats feels a bit flat.

If you’re looking into Disney’s back catalogue, you could do worse than The Aristocats. But you could also do a whole lot better.

4 thoughts on “The Aristocats Review”