Happy Halloween everybody! I’ve been quietly celebrating this awesome holiday through my recent string of Castlevania reviews, but I also thought I’d whip up something a little more unique on the day of Halloween itself. So here it is, a list of the top five witches in video games!

I don’t want to hear anyone say I forgot some character or failed to mention so and so. This list is narrowed down to five, after all, and it’s just based on my opinion. This is a pretty different list than usual anyway. I could always make revised editions, if that suits your fancy.

Also keep in mind that these characters have to be primarily identified as witches. No mages, sages, wizards and shamans allowed.

So without further ado, grab a witch’s brew, or I’ll get you my pretties, and your little dogs too! Or, you know, here are the top five video game witches. 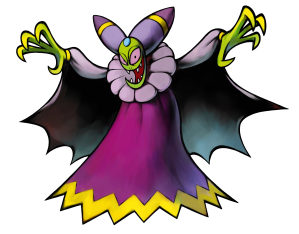 Cackletta may have only appeared in a single game (and for a Mario character that’s all the more shocking), but she’s one of the more memorable villains from the Mario series. She meshes with the game’s sense of humor, but is also one of the series’ few truly sinister villains. And she gets bonus points for having the unique plan to steal Princess Peach’s voice (and replace it with explosives) instead of simply kidnapping the princess herself.

And let’s not forget Cackletta introduced the gaming world to Fawful, her grammatically-impaired sidekick. For that alone we should all be grateful.

4: Twinrova (The Legend of Zelda series) 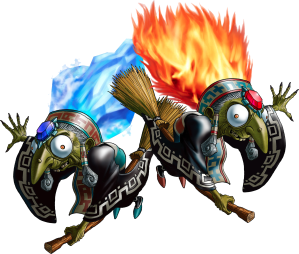 Kotake and Koume – collectively known as Twinrova – are two evil witch sisters who possess powers of fire and ice. These old hags can even merge together to become a single, strangely attractive younger witch who doubles up on magic power!

It should also be noted that in Ocarina of Time, Kotake and Koume are Ganondorf’s adopted mothers. Suffice to say their wickedness raised one bad egg.

Although in subsequent Zelda games Kotake and Koume took on less evil incarnations, they still remained memorable characters. And besides Ganon himself, is there another boss in Ocarina of Time that we remember half as much as these two? 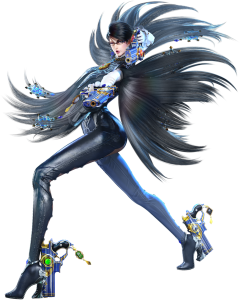 It may seem strange to only rank Bayonetta at number three on this list, but one of the criteria is how “witchy” these characters are. And Bayonetta isn’t the most witchy witch out there.

Bayonetta is the only character in this list who isn’t a villain, and the only one who’s the star of their game. Aside from being sexy to the point of ridiculous, Bayonetta is also a pretty badass character who combines magic with weapons with sexy dance moves!

Anyway, Bayonetta also boasts some of the most fluid controls of any video game character, up there with the likes of Mario. And the character herself is a bit classier and has more personality than her artwork, moves and strategically-placed camera angles might suggest.

She’s a fun character who provides great gameplay, and looks good while doing it. 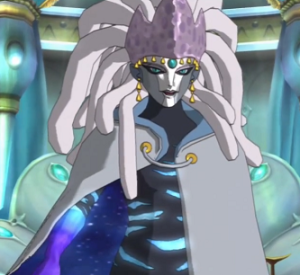 Cassiopeia is the tragic figure of this list. Though she’s the titular villain of Ni no Kuni: Wrath of the White Witch, her ultimate goal, while misguided, is a means to rectify a terrible tragedy that she inadvertently caused long ago. Despair, sadness, and regret are her motivators, not evil.

Even though she’s a more tragic villain, Ni no Kuni does a great job at making her the “big bad” of the game. Though the player is aware of her presence from the get-go, the heroes of the game all believe the hooded figure Shadar is their main adversary for a good chunk of the adventure, unaware that he’s merely one of Cassiopeia’s servants. Players may already know about her, but it doesn’t change the “holy crap” feeling when she reveals herself to the heroes.

Cassiopeia has become one of my favorite video game villains (and I feel she, and the game she’s in, have already become underrated). She’s a deep character who, despite becoming a villainous figure, has motivations and ambitions that are both relatable and sympathetic.

It also doesn’t hurt that she provides a small handful of memorable boss fights. 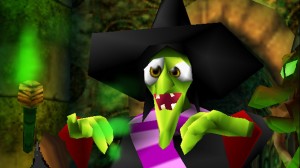 Well who else was going to be number one? Gruntilda is the quintessential video game witch! From her stereotypical green skin, pointy hat, flying broomstick and plans of stealing someone else’s beauty, Gruntilda is a textbook witch. But she also has a great sense of humor, and she possibly has more personality than any character in a game swimming in characters with personality.

Something of a parody of both the Wicked Witch of the West and the Evil Queen from Snow White, Gruntilda is a walking joke of a fairy tale villain. She has a penchant for rhyming, verbally abusing her magic cauldron, and hosting game shows.

She’s also a bit bumbling, with Banjo and Kazooie having enough time to go on their adventure simply because Gruntilda can’t squeeze into her own beauty-stealing machine. And every other character in the game is constantly reminding Banjo and Kazooie what a ghastly old hag Gruntilda is.

Gruntilda may just epitomize the appeal of the Banjo-Kazooie games. Her character design is nothing special, but like everything else in the game, Gruntilda is more than what her generic look might suggest.

A villain as entertaining as any, Gruntilda is the video game witch!