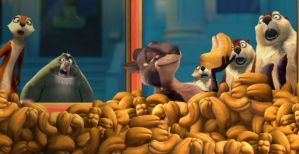 The downside to animation’s increased popularity over the course of the new millennium is that it has created an abundance of throwaway movies that simply try to cash in on the popularity of the medium. The big animation studios, a good deal of independent animated features, and the works of foreign animation studios have continued to up their game, but it hasn’t stopped the floodgates of rushed, lazy, insufferable cartoons from still sneaking their way into cinemas. There is perhaps no cartoon that better serves as the poster boy for such movies than 2014’s The Nut Job.

To put it simply, The Nut Job is a terrible movie. The characters are annoying, the story is weak, the writing haphazard, and the animation itself would look underwhelming on a Saturday morning cartoon.

It’s shocking then, that such a movie could somehow nab the star power of Will Arnett and Liam Neeson, who voice the main character and antagonist, respectively. It’s a safe bet that the movie’s entire budget went into the voice cast – who admittedly give it an honest effort but have no chance at saving the material – because there’s no sense of style or personality in the art direction, and I repeat that the animation is simply unpleasant to look at.

Arnett voices Surly, a purple squirrel who puts up an argument to being the most unlikable hero in any animated movie. He’s selfish, rude, belittles his only friend (a mute rat named Buddy whom I assume was supposed to be charming), and is an all-around jerk. By the end of the movie, he is marginally less so. Liam Neeson voices a raccoon, aptly-named Raccoon, who is a bit of a control freak, and rules over the animals of the park by controlling their food supply.

Anyway, our misfit “hero” ends up causing a catastrophe in the park, leading to his banishment to the city. There he finds a nut store that also happens to be a front for 1950s mobsters. The nut store is located next to the city bank, and while the faux-proprietors of the nut store plan a bank heist, Surly and Buddy form an uneasy alliance with the animals of the park to plan a nut heist. That’s the gist of it.

The movie is utterly charmless. Besides the main character being so unlikable that you want to see him step on one of the nut store’s mouse traps, the other animals are in a perpetually manic state, which I guess is supposed to be either funny or exciting, but only ends up being grating. The characters also lack distinction from each other as a side effect of the movie’s lazy design. Surly, as well as his love interest Andie and an unnecessary third squirrel character named Grayson are visually distinguished solely by color (Surly is purple, Andie is orange, Grayson is gray). And whenever they aren’t making bad, nut-based puns or being jerks to each other, the animals have a tendency to make bathroom jokes. Burps and farts abound.

As if the movie wasn’t cluttered enough as it is, it even tries to give the mobsters their own side stories. The mob boss has recently been released from prison, his love wants him to quit his ways and lead an honest life, etc. It’s the same kinds of cliches you’d always see in movies from the 50s, which admittedly is kind of novel to see in animation, but that’s about as much compliment as this movie deserves. The story involving the mobsters only makes the already-stretched plot even more convoluted, though it actually ends up being more interesting than what the animals are doing. Not that that’s saying much.

The icing on the cake is the use of PSY’s “Gangnam Style” in the movie. Because nothing says “insipid cartoon” quite like a bunch of annoying animals dancing to a song that already dwindled by the time the movie was released. A cartoon version of PSY even appears in the end credits to dance with the animals, ensuring that even the credits are prevented from being timeless.

Honestly, The Nut Job is just one bad movie. The voice cast is clearly trying, and the likes of Will Arnett and Liam Neeson have proven to be capable voice-over actors several times in the past, but you can’t give a turd a few good voices and expect it to be anything but. I think even kids would find The Nut Job to be irritating (it is, after all, a movie that speaks down to them despite being its target audience). The 1950s setting is kind of different, but it makes it hard to care when the story it tells is so bland the characters that inhabit it are insufferable.

If good animations are timeless, charming and emotional, then cartoons like The Nut Job are their antithesis. It’s basically every bad cliche of modern animation in a nutshell. It’s a nut that isn’t worth cracking.

One thought on “The Nut Job Review”