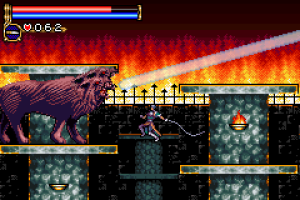 Symphony of the Night marked a major turning point for the Castlevania series. By combining the traditional Castlevania action-platforming with the exploration of Metroid and added RPG elements, it effectively launched the Metroidvania sub-genre as we know it today. Though recent years have seen a reboot on the franchise that abandons the Metroidvania structure in favor of 3D action, the style laid down by Symphony of the Night continued for a decade through six titles released on the Game Boy Advance and Nintendo DS. The first entry in the GBA trilogy, Circle of the Moon, had a lot to prove, being the closest thing to a successor to Symphony of the Night at the time. Though Circle of the Moon remains a fun game in its own right, today it feels somewhat lightweight compared to some of its other Metroidvania siblings.

Circle of the Moon abandons the usual Belmont clan and Alucard in favor of a new hero named Nathan Graves. Nathan is the student of former Dracula-slayer Morris Baldwin, along with Morris’ son Hugh. When Dracula is once again resurrected by one of his minions, Nathan, Morris and Hugh venture to Dracula’s castle to banish the vampire lord. But upon their arrival, Dracula sends Nathan and Hugh plummeting into a pit, while Morris is kidnapped in order to be sacrificed to revive Dracula’s full power. Nathan and Hugh awake in the bowels of Dracula’s castle, with both going their separate ways to rescue their master before the sacrifice can take place at the full moon.

It’s a simple plot even by Castlevania standards, and one that has been retconned as non-canon in the series’ timeline (to the chagrin of many fans). But any excuse to traverse the labyrinth of Dracula’s castle is a good one, I suppose. 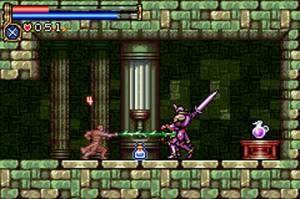 The first thing you’ll notice about Nathan Graves is that he controls very similarly to the Belmonts. He is even equipped with a magic, vampire-hunting whip. Like the Belmonts, he can also pick up secondary weapons such as throwing axes and boomerang-like crucifixes, which require collectible hearts to be used.

On the downside, the whip is the only main weapon Nathan has. While the combination of Symphony’s structure and traditional Castlevania action is interesting, the lack of alternate weapons also means that Nathan’s gameplay lacks the variety of Alucard or Soma Cruz.

There are two types of DSS cards: Action and Attribute. The action cards determine the type of magic that Nathan can use, while the attribute cards add different effects to them. For example, you can use an action card to add lightning damage to Nathan’s moves, and an attribute card that will multiply your strength by the percentage of the castle you’ve explored. You can combine one action and one attribute card at a time, for a total of 100 different combinations.

The DSS cards are definitely an interesting twist, though they ultimately aren’t as captivating as the Tactical Soul System from the later Aria of Sorrow. And they are used somewhat awkwardly, since you use them by highlighting the cards in the pause menu, and then un-pausing, as opposed to simply selecting them in the menu itself. You then activate their powers by holding the L button, which eats up magic points.

The castle itself is a decently large place, though it feels smaller than in the later handheld entries. Though it may feel bigger than it is due to Nathan’s slow movement, which makes traversing the place feel like a long process. You gain the ability to run early on, but you still have to activate it by pressing forward twice. A held button press may have felt more natural. Better still would be if Nathan Graves simply moved faster by default.

Besides running, Nathan Graves learns other moves like double jumps and wall kicks after defeating bosses, which help him access new areas of the castle. You can still gain experience points and level up, but in order to boost your Hit Points, Magic Points, and Hearts, you have to find special items hidden throughout the castle. 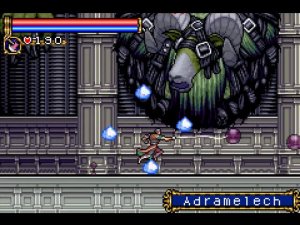 You can pick up armor for your body and both arms throughout the adventure, as well as healing items. But they end up feeling like tacked on elements. You rarely seem to have to change your armor, and most of the items seem to help with minimal effect, with initial potions only healing twenty hit points, which quickly becomes a very small fraction of your health.

The graphics of the game have held up somewhat decently. The enemy designs still stand out, though Nathan Graves’ sprite looks simple even by GBA standards. It doesn’t hold up as well as (the still beautiful) Aria of Sorrow when played on your TV through the Wii U Virtual Console, but it still looks nice on the Gamepad. The music is catchy, though it falls considerably short of the series’ standard.

The other big drawback to Circle of the Moon is the castle itself. It just feels more straightforward and less creative than the castle found in the other Metroidvania entries of the series. And Nathan’s aforementioned slow pace only makes matters worse. It’s not terribly designed by any means, but where Symphony of the Night and Aria of Sorrow’s level structure are pure genius, Circle of the Moon’s castle just feels simple by comparison.

Circle of the Moon remains a fun game, and the adventure will last a decently long time for a handheld title. The DSS cards also add a nice twist to the equation, but as a whole it feels like a more watered-down version of the Metroidvania concept. It does deserve credit for continuing this beloved style of Castlevania and bringing it to handhelds. But it lacks the variety and depth of some of the more notable Castlevania titles of the style.

3 thoughts on “Castlevania: Circle of the Moon Review”