As part of my continued celebration of Donkey Kong Country 2’s twentieth anniversary, I thought it’d be fun to make a top 10 list of the Kongs themselves. That is to say, the simian characters who have appeared throughout the series.

Of course, there are a total of thirteen Kong characters who have appeared throughout the series, so I may as well say the three who won’t be appearing here from the get-go. Tiny Kong won’t be on here, because she’s just an unnecessary and sucky version of Dixie. Chunky Kong also won’t be here, because he’s just an even dumber version of Kiddy Kong (why didn’t DK64 just reuse the characters from DKC2 and 3 instead of making goofy replacements for them?). And Candy Kong won’t be here. Because eeewww.

Now with that out of the way, here are the top 10 Kongs from the Donkey Kong series! 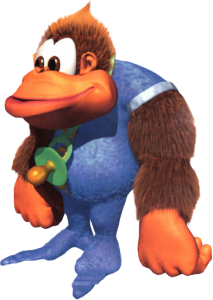 As a character, Kiddy Kong is…kind of lame. His only defining traits are that he’s big, and he’s a baby. And he plays so similarly to Donkey Kong himself I’m still convinced DK was supposed to return in Donkey Kong Country 3, but because Rare didn’t want to take the spotlight away from Dixie Kong, they quickly whipped up Kiddy Kong and called it a day.

As a playable character, however, Kiddy Kong is actually pretty useful. His strength compliments Dixie’s agility. Kiddy can throw Dixie to great lengths and reach otherwise unreachable areas, while Dixie can throw the hefty Kiddy short range to break walls and floors. His brute strength also means he can take out the bigger enemies.

A lame DK clone, but a useful one. 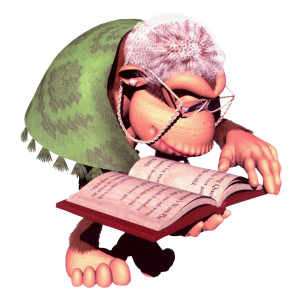 DKC2 introduced Wrinkly Kong as a replacement to Candy Kong. Wrinkly is Cranky’s wife, and has a polar opposite personality to her husband. While Cranky is, well, cranky, Wrinkly is a kindly elder who is always willing to give the Kongs helpful advice.

Donkey Kong 64 tragically revealed that Wrinkly passed away some time after DKC3. But she still proves helpful even from beyond the grave, continuing to give her sagely advice to the Kongs in spirit. Her ghost version continues to appear in games today, being one of the friendlier specters in video games.

It still seems kind of weird that Donkey Kong Jr. was the first Kong to become a playable character (in a game that bore his own name, no less). Not to mention he was also the first Donkey Kong character to be playable in a Mario Kart game (not counting Mario). Weird as these accomplishments may seem today, they help secure DKJR a spot on this list.

Sadly, Donkey Kong Jr. has been largely forgotten by Nintendo, with his last appearance being Mario Tennis on the Nintendo 64 over fifteen years ago!

It has since been established that the original Donkey Kong grew old and became Cranky Kong, while Donkey Kong Jr. grew up and had a son, who is the current Donkey Kong. But the DK games have yet to reveal, or even mention, what became of the original DKJR. He remains one of gaming’s unsolved mysteries. 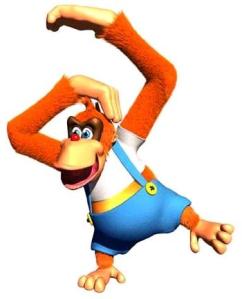 A lot of people really don’t like Lanky Kong. I suppose that’s fair, he does look kind of goofy. But at least he’s not just a poor man’s version of an established character like Tiny and Chunky!

What puts Lanky on this list is that he’s one of the more original Kongs. For one thing, he’s an orangutan, so he instantly stands out. But he also has fun, useful abilities like being able to take out enemies from a distance with his long limbs, and his ability to walk up steep hills with a handstand (don’t ask me how walking on his hands allows him to do so).

Plus, he can inflate himself, just like a balloon. And stretch his arms out, just for you.

Swanky is a gorilla who hosts game shows. Do I need to say more?

Ignoring the fact that his voice sounds like Jar Jar Binks in Tropical Freeze, Funky Kong is one cool dude. He’s got all the style to live up to his name, and he’s a wicked mechanic to boot!

In the first two DKC games, Funky provided the Kongs with a means to revisit past levels with his flying barrel planes. In the third DKC, he’d craft all kinds of vehicles for the Kongs to pilot in order to traverse the world. Then, in DK64, he became an ammunitions expert, and gave all the Kongs their weaponry.

Perhaps an even bigger accomplishment is that Funky Kong is one of the few Kongs to crossover into the Mario series, as he became a playable character in Mario Kart Wii. Here’s hoping this coolest of Kongs continues to make many appearances. 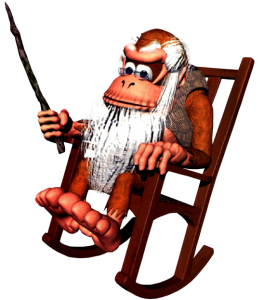 Cranky Kong is the original Donkey Kong who fought against Mario in the arcade classics. For reasons unknown, Mario has defied aging while DK grew older and crankier, eventually becoming Cranky Kong.

Age hasn’t slowed Cranky one bit, however, as he remains very much active in games even today. His sagely advice (and verbal abuse) has come in handy to the Kongs in various adventures. He was a rival in Swanky’s mini-games in DKC3, and his scientific research taught the Kongs their new moves in DK64. More recently, Cranky opened up a shop in Donkey Kong Country Returns.

Perhaps Cranky’s biggest break in recent years was becoming one of the playable characters in Donkey Kong Country: Tropical Freeze, where he could bounce on his cain a la Scrooge McDuck to get across deadly surfaces, and could take down enemies by shooting his dentures at them.

You should always respect your elders, but this is doubly true for Cranky. Because if you don’t, he’ll never let you hear the end of it. 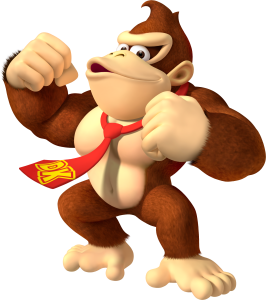 He’s the leader of the bunch, you know him well.

While the original Donkey Kong was an antagonistic character, the current DK is one of Nintendo’s flagship heroes.

When Donkey Kong Country was released in 1994, it marked a reinvention for the series, and its titular ape. After Mario spun-off from the series, DK floundered in irrelevancy for years. Then DKC showed up and made DK a star again.

Granted, he’s technically a different character than the original DK (I guess “Donkey Kong” is more like a title. Like a Dread Pirate Roberts kind of thing). But the DK brand hasn’t fallen by the wayside since the mantle was passed down in 1994.

He’s the star of the series, one of the strongest Kongs, and one of Nintendo’s most beloved characters. Plus, he wears a necktie. That’s class right there.

In a strange way, Diddy almost represents the DK series better than DK himself. He was introduced in Donkey Kong Country, which established him as the newest face associated with the series (seeing as DK has ties to Mario’s series). He starred in the sequel, had his own racing game, and has been at DK’s side ever since he was introduced. Not to mention that he’s popped up in the Mario series numerous times, including Mario Karts and the sports titles.

Simply put, when DKC arrived, it brought back an old Nintendo favorite, but it was the new face in the game that went on to become the fan favorite.

Diddy is part parody of the “animal with attitude” archetype that was popular in gaming in the nineties, and part genuinely cool. I mean, he’s a monkey who jams out to a boom box! What’s not to like? 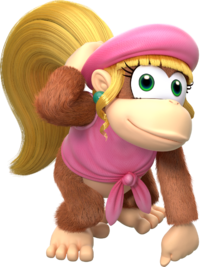 Since her introduction in Donkey Kong Country 2, Dixie Kong has continuously proven to be the best Kong there is.

Aside from debuting in one of the best platformers ever, what made Dixie so memorable was how useful she was. Her ponytail gave her a helicopter-like spin, which allowed her to glide and slow her falls. This was an invaluable addition to the gameplay.

She then starred in Donkey Kong Country 3, and made many more appearances throughout the series. In later entries, she even gained the ability to use her hair like a whip! She also appeared in the Mario Baseball games, and will hopefully crossover into other Mario games one day (seriously, put her in Mario Kart!).

Perhaps Dixie’s usefulness has never been more present than it is in Donkey Kong Country: Tropical Freeze. Sure, you can also get help from Diddy and Cranky, but whenever you have Dixie as an option, you won’t be picking the other two. In Tropical Freeze, she can once again glide, but her ponytail also adds a second jump to the equation. Whereas Diddy and Cranky’s abilities are helpful on certain levels, Dixie’s abilities are a lifesaver on any stage.

Though her appearances have become less frequent in recent years, Dixie has a pretty impressive list of games to her resume. And her contributions to each of them have been great. Let’s hope she starts showing up more often again, because Dixie Kong is the best Kong around!

Now, why isn’t she in Super Smash Bros.?

2 thoughts on “Top 10 Kongs in the Donkey Kong Series”