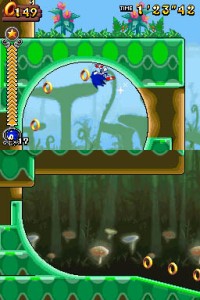 There has been no series in all of gaming that has fallen so far from grace than Sonic the Hedgehog. Once one of the most iconic video game characters who would often draw comparisons to Super Mario, Sonic has become little more than the butt of a joke. A lingering entity that – despite releasing a slew of games so bad that a single one of them would kill most franchises – survives solely due to his hopelessly loyal and increasingly bizarre fanbase.

With this said, Sonic has somehow, beyond all expectations, still provided a small handful of good games in between his many misses. Sonic Colors and Generations are often cited as the blue blur’s last quality titles, while the Sonic Advance games kept the spirit of the Genesis classics alive on the GameBoy Advance in a time when the hedgehog’s console outings were floundering. Somewhere in between Sonic Advance and Generations were the Sonic Rush titles on the Nintendo DS, which followed-up Advance’s take on making the old formula new again. Though the original Sonic Rush may show a bit of age, it’s still head and shoulders above what Sonic has been starring in lately.

Like the Sonics of old, Sonic Rush plays from a 2D perspective, though the characters are displayed with 3D models. Players can take control of either Sonic himself or Blaze the Cat, who was introduced here and comes from another dimension.

Players still run at super fast speeds through seven different zones, each consisting of two acts and a boss fight (which switch to 3D perspectives at times). While Blaze combats Sonic’s usual foe Dr. Eggman in order to obtain “Sol Emeralds” (her world’s equivalent of the Chaos Emeralds), Sonic faces off against Dr. Eggman Nega, who also hails from the parallel dimension.

Though both Sonic and Blaze tackle the same sets of levels, they go through them in a different order, and have slight differences in gameplay. Sonic is of course the faster of the two and has a homing attack, while Blaze can jump higher, can survive longer under water, and has a short glide. Both characters also play out different parts of the story, and completing both, as well as obtaining all the Chaos Emeralds, unlocks a final challenge.

The usual Sonic gameplay returns, with rings to collect, loops to run through, and various obstacles and enemies to overcome. The game makes great use of the DS’ two screens, with the levels being featured on both and the player crossing from the top screen to bottom and back again seamlessly.

The game retains some elements introduced in the Sonic Advance sequels, such as a grading system after a player finishes each act in a zone. Players are graded by how quickly they beat a level as well as their performance.

Another additional feature is the “Tension Gauge,” which players can fill up by defeating enemies and performing tricks in midair. Filling the gauge allows players to perform greater boosts of speed, which take out enemies with ease and allow you to finish the level faster, thus increasing your grade.

Sonic gets an additional bonus with the Tension Gauge, however. When playing as Sonic, the player can grab onto various metal orbs found throughout the levels. If you have enough of the Tension Gauge filled up, Sonic can boost while holding these orbs to teleport to the special stages, where he can find the Chaos Emeralds.

While the special stages can be fun (if difficult), it’s a shame that they’re exclusive to Sonic. Blaze just comes across the Sol Emeralds as part of her story, but the player actually has to work harder and delve deeper to find the Chaos Emeralds for Sonic. It makes Blaze’s introduction feel more superfluous than it would already be, considering she’s around the 300th unnecessary animal character added to the series. Why add the second character if they don’t have as much to do as the series regular?

Another problem arises in the levels themselves. Most of the stages are easy enough, but there are a number of areas where the stages actually work against the idea of going fast. Some people criticize the Sonic series for having moments that pretty much play themselves, but that wasn’t really true of the Genesis games, which had a good balance of fast-paced action and more strategic moments that let the player know when to slow down. That balance isn’t found here, and you’ll often find yourself simply zipping through a stage, collecting every ring and defeating every enemy with little to no effort, and suddenly falling into a bottomless pit. The level structure is certainly better than what Sonic is seeing today, but Sonic Rush has too many cheap moments that have the player moving fast, and then seemingly punishing them for doing so.

While the levels are mostly easy outside of those cheap moments, the game takes an unnecessary leap in difficulty with the boss fights. I’m not exaggerating when I say I got two game overs on the first boss alone. Despite most of the boss’ patterns being easy to predict, one of his moves sweeps Sonic off-stage if you fail to leap over it (sometimes repeatedly and at increased speed), effectively killing you in one hit. And that’s just the first boss! Granted, the easy level/difficult boss ratio isn’t as grossly imbalanced as it would be in Sonic the Hedgehog 4: Episode 2, but the fact that it’s there at all is a pain.

The decade since Sonic Rush’s original release has exposed some great flaws and inconsistencies with the game. But at the very least, its heart was in the right place. While so many modern Sonic games feel like the last thing they want to be is a Sonic game, Sonic Rush recreates much of the charm the series was built on. Though it’s flawed, Sonic Rush may leave you wondering why Sega seems incapable of making more games like this. With some extra polish and dedication, Sega could take this formula and rightfully revive the Sonic franchise.