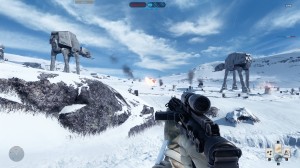 If ever there were a game that replicated the look and feel of the battles of the Star Wars films, this is it. The visuals are fantastic, and bring the world of Star Wars to life. Various locations from the films are recreated, and more often than not you’ll feel like you’re a part of one of the famous action scenes from the series.

The game is primarily a multiplayer shooter, with players taking control of either the Rebel Alliance or the Galactic Empire. Players are able to customize their character’s appearance as either a Rebel soldier or an Imperial stormtrooper, as well as select from a wide range of blasters that have attributes of their own. Similarly, players can select from a pool of secondary items to form a “hand,” with different hands being able to be equipped, giving the player plenty of options to suit their play style.

New blasters, items and customization options progressively unlock as the player earns more credits and levels up from their multiplayer battles. There are even power-ups to pick up in-game to help you out even further.

Though the controls can take some getting used to, the core gameplay is fun. Considerably less fun is controlling a vehicle. During certain game modes, players can take control of vehicles on the land and in the sky, but most of them move too fast and are difficult to get the hang of and maneuver through the environments. Some modes favor the vehicles more than others, and some players may want to dedicate more time to mastering them. But for most players, the standard on-foot action is simply more fun and accessible.

In a number of game modes, both the Rebellion and the Empire have three playable heroes. The Rebels get Luke Skywalker, Han Solo, and Princess Leia, while the Empire has Darth Vader, Boba Fett, and Emperor Palpatine. Depending on the mode selected, players will take turns playing as the hero characters, or earn the right to play as them.

The heroes aren’t customizabe like the standard character, but they are considerably more powerful, able to take out the average player in a single hit. The heroes have specials unique to them, such as Darth Vader’s Force choke or Boba Fett’s jetpack, but have one notable disadvantage as to not entirely overpower them. The standard characters’ health will automatically heal after a short time, similar to the Halo games. But heroes can only heal via a special item dropped by Princess Leia (Rebels) or Palpatine (Empire). The heroes also can’t pick up the power-ups throughout the stage, and have to rely solely on their innate abilities. 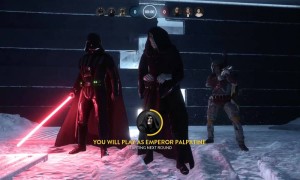 Battlefront has a host of different game modes, and one might argue it actually boasts too many of them. While most are simple and fun – like Supremacy, which throws all of the games features into the mix as player’s vie for control points, and Heroes vs. Villains, in which random player’s become the aforementioned hero characters and try to eliminate the other team’s heroes – but a number of the game modes are just run-of-the-mill shooter cliches.

Another downside  comes in the form of the game’s audio. When Battlefront is using the John Williams film scores, it’s of course a joy to listen to. But the game’s original music is more than a little forgettable. The character voice samples are also bland and repetitious. This is especially true for the heroes, who repeat a series of lines that are quasi-related to some of the ones they say in the movies (“How much is Jabba offering you?” Han Solo might say when Boba Fett fires at him). The sound effects for the weapons are all pulled from the movies, so they work fine, but the original music and sound clips are kind of a bore.

Though games like this are mainly made with multiplayer in mind, it may be a bit of a disappointment for some that there is no single player campaign to speak of. Aside from some training missions, there’s not a whole lot here for those looking for a single player experience.

Perhaps the biggest downside to the package is simply that, if you’ve played this kind of game before, then you more or less know the drill. The Star Wars license makes it more aesthetically pleasing and more welcoming than most of its kind (especially considering there’s no mention of the prequels to speak of), and for diehard fans of the Galaxy far, far away that may be enough.

Despite the drawbacks, Star Wars Battlefront can provide a good deal of fun. Best of all, it replicates the look and feel of the saga like so few games have.