*Review based on the PS4 version*

There aren’t many indy games that have developed the kind of acclaim that Journey did upon its 2012 release. Journey, developed by ThatGameCompany, is a game all about creating emotion through simplistic gameplay. Though playing through Journey may make some of its praise seem a tad excessive, it ultimately provides a unique experience that makes it stand out among many of its indy peers.

As you may have guessed, Journey is a game about a journey. Players take control of an unnamed, hooded figure who  wears a scarf, and lacks visible arms and discernible gender traits. This figure resides in a seemingly endless desert, with their goal being to reach the peak of a mysterious mountain in the distance.

The gameplay is remarkably simple, but provides some originality. Aside from moving, the figure’s only real actions are jumping and sending out an echo-like chime, which has a larger range depending on how long the button was held.

The hooded figure’s scarf also plays a symbolic role in the gameplay. At the beginning of the game, the scarf barely extends passed the figure’s neck, but by collecting various glowing “symbols” throughout the game, the scarf increases in size. Various clothe-like objects and creatures inhabit the game world, and using the chime near them allows the figure to jump multiple times and glide for a short while. The amount of jumps and the length of glides is represented by the runes inscribed in the scarf, which briefly disappear when the player takes advantage of the clothe abilities. As you may have guessed, the longer the scarf is, the longer you can traverse through the air.

Journey’s only enemies are flying, stone-like giants, who appear periodically in later parts of the game, and try to tear apart the player’s scarf if they are seen by the creatures’ spotlight gaze. They’re a small part of the game, as the real objective of Journey isn’t fighting enemies, but simply finding the symbols and finding a way to reach the next area. 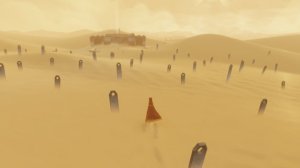 Admittedly, because of the game’s very simple structure, Journey doesn’t boast a whole lot of depth in terms of gameplay. The journey itself will only take around an hour and a half or two hours to complete, and outside of trophies, there’s not a whole lot of incentive to make repeated visits. But Journey succeeds where many other games of its kind fail for two key reasons.

The first of these reasons is that Journey is an aesthetically beautiful game. The visuals are absolutely gorgeous. Though the game only really takes place among two different settings (sand desert and snow desert), the game uses lighting, shading, and other techniques to give the world some great variety. One segment has the figure surfing down a sandy hill, with the sun reflecting on the sand in such a way to make it look like gold, while another takes place in some ancient ruins, whose blue lighting, seaweed-like clothe and jellyfish clothe creatures mimic the water levels found in most games. The musical score is a beauty to listen to, and helps capture the appropriate emotion for each chapter of the game.

Journey’s aesthetics successfully back up the game’s minimalistic style, and the story itself feels more honest and less self-important than other artsy indy titles such as Limbo, which helps the emotion shine through all the more. The last few chapters in particular are things of beauty.

The other reason Journey proves better than most other games of its ilk is its unique implementation of multiplayer. 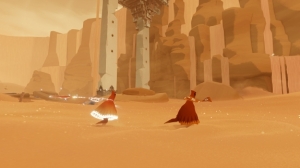 Throughout any given playthrough, players may randomly come across another player from around the world. No player names are shown (until after the credits), and the only interaction between players are the aforementioned echoes, which can help boost each player’s scarf power, thus allowing them to work together to reach the next segment of the game.

It’s a unique spin on multiplayer that is complimented by the game’s insistence on minimalism. The inability to communicate while still being able to aide one another makes for a very subtle and friendly take on co-op. And the fact that you aren’t guaranteed to run into anyone else makes it all the more of a pleasure when you do run into them.

In the end, Journey provides a rare kind of experience in games, one that’s soothing and calm, as opposed to brutal and competitive. By doing so it is a very enjoyable experience, but as stated, the lack of gameplay depth or any real means of longevity do hold it back as a game. The short length doesn’t matter, if anything, the story benefits from it. But the lack of anything to do outside of going from point A to point B and other additional features means that the Journey is very short lived.

It may lack depth in many areas, but Journey can at least claim something that the majority of its contemporaries can’t. While many such artsy games just feel like Super Mario traded fun for pretentiousness, Journey boasts ideas of its own.