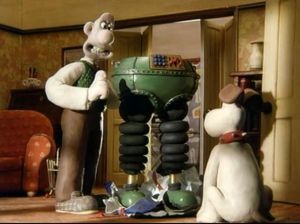 The Wrong Trousers takes the simplistic duo of Wallace and Gromit, and places them in arguably their most intricately animated adventure ever. Gromit’s birthday has arrived, and Wallace’s present to his dog is a pair of “Techno Trousers,” a highly expensive pair of walking pants to take Gromit on his walks. But the price of the trousers, along with various bills, leaves Wallace in need of money, so he decides to let their spare bedroom out.

A strange, silent penguin named Feathers McGraw ends up staying in the room. Unbeknownst to Wallace, Feathers is actually a wanted criminal, who later plans on using the Techno Trousers (and an oblivious Wallace) as a means to steal a valuable diamond, while also plotting to have Gromit run away from home, as Gromit grows suspicious of the penguin.

If the plot sounds silly, it’s because it is. The Wrong Trousers cleverly combines the series’ charming characters with a spoof of Hitchcock-style suspense movies. It’s the animation itself that makes The Wrong Trousers a wonder to behold. 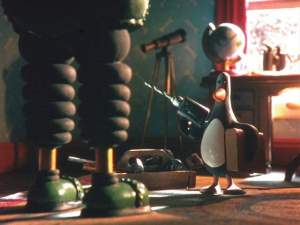 Every moment of The Wrong Trousers will have you wondering how it was made. The opening scene alone gives audiences a glimpse of Wallace’s eccentric lifestyle, as he is awakened by a contraption that pulls him from his bed, dresses him, and eventually lands him in his favorite chair just as his morning toast pops from the toaster and is blasted with projectile jelly. To see it all in motion is close to miraculous.

Then there’s the aforementioned heist, which has Feathers manipulating the Techno Trousers to send a sleeping Wallace up and down the walls and ceilings of a museum. And the finale, which sees a parody of the many train-based chase sequences in film history on the top of a model train, is astonishing.

The character models have been improved from A Grand Day Out, now that Nick Park had funding from Aardman from the get-go, and the higher production values really show. Wallace now has is more defined character design that’s still used today, and the short allows for some great uses of facial expressions and emotions on the characters.

Being only a half hour long, the delights of The Wrong Trousers only last for so long, but you’ll likely enjoy every minute of it. It’s true that there’s not a whole lot story-wise that feels outside of animation norms, but in terms of the animation itself, The Wrong Trousers is an absolutely stunning work.