Castle in the Sky holds a very important role in the history of Japanese animation. Though it wasn’t the first film directed by Hayao Miyazaki, it was the first feature released under Studio Ghibli. Though the then-new studio was gambling with Castle in the Sky (an animated film not based on an existing comic was considered unpopular in Japan at the time), the film ended up being successful enough for Studio Ghibli to flourish for nearly three decades, thus setting in motion the most legendary catalogue of films in animation.

In many ways, Castle in the Sky is a much simpler film than other Miyazaki features. Whereas most of Miyazaki’s later works would be famous for their character depth and their more character-based stories, Castle in the Sky is a tried and true adventure film. But due to its staggering imagination, and the excellence of its execution, it easily ranks as one of the greatest adventure films of all time, animated or otherwise.

Though it was released in 1986 and was Studio Ghibli’s first feature, Castle in the Sky remains  a timelessly beautiful animated film. Though it can’t match the sheer visual splendor of Ghibli’s later movies, the memorable character designs, fluid movements, and attention to detail the studio is famous for are all still present. It’s a joy to look at from the very first frame.

The film takes place in a world of pure fantasy, with magic crystals, robots, and flying machines galore. The story sees a young boy named Pazu, a miner’s apprentice, meet a mysterious girl named Sheeta as she falls from the sky, wearing a glowing crystal on her necklace.

Pazu dreams of seeing the legendary flying castle of Laputa, long-believed to be a myth by all but his father, who took a single photograph of the castle before the world called him a liar (as Pazu cryptically states, “being called a liar is what killed him.”). Sheeta and her crystal hold secrets connected to Laputa, and together, the two orphans set out to find the legendary kingdom. 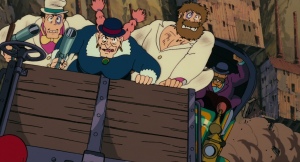 Their quest won’t be easy, however, as a gang of notorious air pirates, lead by the elderly Dola and her sons, are after Sheeta and her crystal to find Laputa and its countless treasures. An even bigger threat looms in the form of the military, who are under the command of the mysterious Colonel Muska, who has even darker desires for finding Laputa.

From the get-go, Castle in the Sky is captivating entertainment. It’s a real testament to Miyazaki’s versatility as a director that he’s most famous for creating more calm features like My Neighbor Totoro, yet films like Castle in the Sky show that he can create action as well as any filmmaker. There’s not a single action scene in Castle in the Sky that disappoints.

The sheer imagination that Miyazaki crafted into the world of Castle in the Sky is a thing of beauty. It’s a combination of fantasy, science fiction and European inspirations that feels entirely unique. It shouldn’t come as much of a surprise that countless anime and video games have been inspired by the world found in Castle in the Sky. 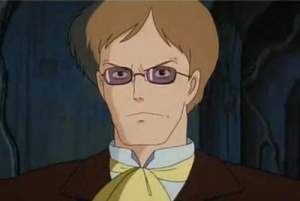 Though the characters are simple when compared to many of Miyazaki’s later casts, they are just as memorable: Pazu and Sheeta are likable and cute, but more importantly, there’s a sense of believability to them that makes them more relatable and sympathetic than most characters in adventure films. Colonel Muska, though a far more blatantly evil villain than most Miyazaki antagonists, is one of the most effectively evil foes in animation. By the film’s third act, he’s genuinely terrifying. It’s Dola who probably leaves the biggest impression though, with her eccentric, hard-nosed personality and boisterous energy, she can be seen as the forerunner of Miyazaki’s unique archetype for elderly characters.

The English language version was provided by Disney, and like most of Disney’s dubs of the Ghibli films, it’s a top-notch translation. Admittedly, the English voices for Pazu and Sheeta (James Van Der Beek and Anna Paquin, respectively) sound a bit older than the characters should, but the voice work is still solid. On the stronger side of things, Cloris Leachman and Mark Hamill are perfectly cast as Dola and Muska, and rank as some of the best dubbed voices in a Japanese animation. Cloris Leachman fits into the role so well it almost seems like it was written for her, and Mark Hamill’s vocals have seldom been so sinister (he might even outdo his iconic take on the Joker here).

As is the case with all but one of Hayao Miyazaki’s features, the film was scored by Joe Hisaishi, and it is another magical soundtrack by Hisaishi that perfectly compliments the sense of wonder from the world Miyazaki created.

All of the film’s elements come together beautifully. Although you could argue that many of its individual elements were bettered by some of the Ghibli films that would follow, as a whole Castle in the Sky remains one of the Studio’s finest works. It’s an immaculate adventure that would feel right at home in an Indiana Jones or Star Wars feature, and it combines that sense of adventure with the impeccable Ghibli spirit.

It’s exhilarating, magical and highly entertaining. And it was one hell of a start for Studio Ghibli.

10 thoughts on “Castle in the Sky Review”