Visual effects are more prominent than ever in movies. Whether it’s the ever-expanding usage of CG, or the practical effects of old, visual effects play a major role in today’s movie scene. Of all the movies released in 2015, one had to stand out above the rest in terms of visual effects. It should be a no-brainer which movie that is. 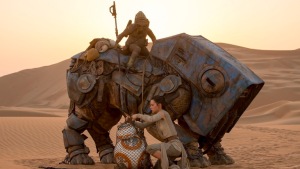 After the prequel trilogy soured the Star Wars franchise with horrible storytelling and an over reliance on CG effects to the point that they looked lifeless and garish, The Force Awakens was a real return to form. Both in that it was a great movie, and that it made the Star Wars universe feel believable again by utilizing practical effects along with CG (which was used as needed, instead of being excessive).

With great costumes, makeup, puppetry, animatronics, and computer generated imagery, The Force Awakens is the best looking Star Wars film so far. And one that uses its visual effects to help bring to life its imaginative universe in the best possible way. It’s as much fun just to look at as it is to watch.