Indie games have become a major part of the video game world. Though they lack the budgets and production values of AAA titles, indie games have finally gained the momentum to go toe-to-toe with the big names of the gaming world today.

I am not one of those people who simply thinks “indie = creative, blockbuster = trash.” In fact, I have found many indie darlings to be flat-out boring (I’m looking your way, Limbo). But I feel that we are finally seeing some indie games that live up to the hype that precedes them. As far as 2015 goes, the best indie game was a no-brainer. 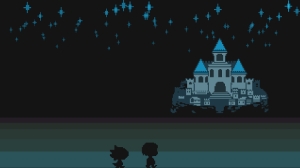 Every monster brings something different to the table, every battle is interactive, and you don’t have to harm any enemy you come across.

Undertale succeeds in two key areas that so many other indie titles stumble: It tells a compelling story that actually feels artistic and not simply self-important. And it combines its narrative with deep and engaging gameplay.

If every indie title could be a fragment as fun as Undertale, I may just have to grow a neck-beard and declare myself a hipster. But Undertale is a shimmering diamond in the rough, so it looks like I’ve dodged the neck-beard bullet.