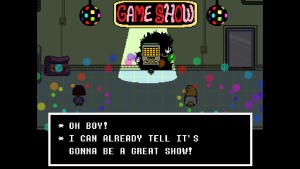 It’s hard to think of many video games that are as much a labor of love as Undertale. The brainchild of Toby Fox was – aside from some art work – created entirely by Fox himself. This includes the game’s stellar soundtrack, which is one of the best in years.

What’s amazing is that the fantastic Mr. Fox claims that he has had no prior musical training, and that he more or less just played what he thought sounded good. You’d be forgiven for thinking Undertale’s soundtrack was done by a number of professional musicians. Dude’s got skills.

Undertale manages to capture a retro feel with many classic video game inspired pieces, and also includes some very tearjerking scores as well. In a game full of highlights, Undertale’s music may be one of the biggest highlights of them all.

Runner-up: Kirby and the Rainbow Curse