The only problem that comes with having a stellar track record like that of Pixar Animation Studios is that, should a film fail to live up to the lofty heights of its predecessors, it often goes unacknowledged for whatever merits it does boast. Such is the case with Pixar’s 2012 animated feature, Brave. Despite good intentions and a whole lot of promise, Brave, though certainly good entertainment for younger audiences, fails to capture the exceptional strengths of most Pixar features.

Brave was to be Pixar’s take on the “princess genre” made famous by their parent company, Disney. Pixar set out to reinvent the genre with a stronger heroine than what had been seen in most of Disney’s films of the same nature, and to eliminate the emphasis on romance. The earlier moments of Brave may have you believing that Pixar achieved their goal. Unfortunately, the film’s production troubles become apparent as the film goes on, with much of that aforementioned promise being washed away by clichés and easier storytelling.

The film’s heroine is Merida, a Scottish princess and an independent tomboy who loves archery and often butts heads with her traditionalist mother, Queen Elinor. Merida is to be married to one of the eldest sons of one of their kingdom’s three neighboring lords, much to Merida’s dismay. Elinor believes such a marriage will further strengthen and unite their kingdoms, while Merida has no interest in marriage, or even romance for that matter (her father, King Fergus,  is more understanding of Merida’s feelings, but lacks the insight to break tradition).

After Merida and Elinor’s disagreements escalate, a distraught Merida runs away and happens upon an old witch. Seeing no other way out of an arranged marriage, Merida asks the witch to make a spell that will “change” her mother, thus changing her fate. But magic is tricky, and while the spell does indeed change Elinor, it changes her in a literal sense, transforming the queen into a bear. Merida and her now bear mother then try to find a way to change Elinor back before the spell becomes permanent.

The story does have its good points, especially at the beginning. Merida is a capable heroine (if maybe a tad forced at times), and making her relationship with her mother the key relationship in the story is a breath of fresh air. But once Elinor turns into the bear, the story begins to lose its uniqueness. It ends up falling into overly familiar animated territory, and more than a few easy plot conveniences (the magic Will-o’-the-wisps show up to guide Merida wherever she needs to go on more than a couple of occasions).

There are also, unfortunately, some rather bland characters. Merida has three younger brothers, for example, all of which are identical and none of which have a speaking part, leaving you to wonder why the movie even needed three of them to begin with. They aren’t even particularly memorable comic relief, seeing as King Fergus already fills that role much better.

Then there’s the villainous “demon bear” Mor’du, who ends up feeling largely unnecessary. His introductory, where it’s explained he ate King Fergus’ leg, is used to inform us of King Fergus’ hatred and fear of bears. But Mor’du’s subsequent appearances just feel like the film is tossing in an antagonist for the sake of having an antagonist (this is another role King Fergus would be better used for, seeing as him unknowingly trying to hunt his wife after she’s turned into a bear makes for a more compelling narrative).

Even Merida herself, while a stronger character than most of Disney’s princesses, can sometimes lose some of her appeal as it becomes obvious that her character is trying too hard to reinvent her archetype. She works for the most part, but the fact that she feels mechanical at any point ultimately does some harm to the character.

On the bright side, Brave once again showcases Pixar’s mastery with animation itself. The film boasts some of the most beautiful environments Pixar has ever created, and the character designs are varied, making for an aesthetically pleasing film. 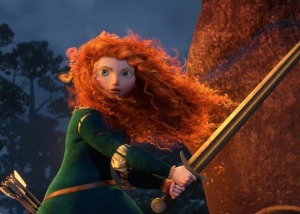 It’s just a shame that Pixar couldn’t have made better with their ambitions for their princess movie. For all its promise of being a reinvention of the princess genre, Brave simply ends up feeling like just another entry in the genre. And thanks to the many clichés and tropes on display, it isn’t among the most memorable, either.

There’s still some fun and enjoyment to be had with Brave, particularly for young audiences. But because it, ironically, misses the mark on so many levels, it’s held back from living up to its ambitions. The fact that it has the prestigious Pixar name attached only magnifies this.