Toy Story 3 seemed to mark a new direction for Pixar Animation Studios. Though Toy Story’s second installment was released early in the studio’s library of features, Pixar still insisted with creating original stories and characters with every movie. But with Toy Story 3’s 2010 release, sequels became a more common occurrence from the studio. Though Toy Story 3 was beloved, its follow-up, Cars 2, remains the studio’s worst feature. After taking a break with sequels in 2012’s Brave, Pixar returned to an established franchise with Monsters University. The 2013 film serves as a prequel to Monsters, Inc.

Monsters University brings audiences back to the monster world, and re-introduces us to Mike Wazowski (Billy Crystal) and James P. “Sully” Sullivan (John Goodman), this time chronicling their time in college before joining Monsters, Inc. In a bit of role reversal, Mike is the protagonist this time around, while Sully serves as the deuteragonist. The only other major character returning from the first film is Randall Boggs (Steve Buscemi), who is more timid and nerd-like here than his more antagonistic, future self. 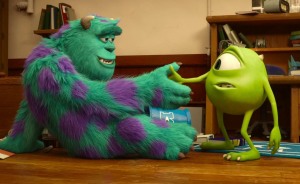 The story sees Mike trying his hardest at becoming a great scarer, despite that he’s probably the least threatening monster around. Sully is more conceited in his younger days, and quickly becomes a favorite student due to his family history, giving him something of an easy ride from the get-go. The more hardworking Mike takes exception to Sully’s attitude, and the two often butt heads.

During one confrontation, the duo’s actions accidentally leads to them being expelled from the scare program. In order to get back in the program, Mike makes a deal with MU’s dean Hardscrabble (Helen Mirran) so he and Sully to reluctantly team up to join the “Scare Games” – a series of events that will test their teamwork, abilities, and scaring potential – in order to get back into the program. But they can’t compete on their own, and must join a fraternity to partake in the games. The only fraternity house available is Oozma Kappa, a house of cuter monsters and oddballs who seem most unlikely to win the Scare Games, making Mike and Sully’s task all the more insurmountable.

Admittedly, the plot is one of the safest and simplest in the Pixar canon. But it’s undeniably entertaining, and the characters remain charming, even if the film never resonates on the same emotional level as the original Monsters, Inc.

Mike and Sully are as memorable as ever, and it’s fun to see how Pixar gave them some differences in their personalities to reflect their younger selves (Sully is far lazier and more arrogant here than his older self in Monsters, Inc.). On the downside, Randall’s story draws something of the short end of the stick. After a fun introduction in which he becomes fast friends with Mike, his downfall in becoming a more antagonistic character happens pretty rapidly and without much context, which seems like a missed opportunity to flesh out the character.

The voice work is expertly done, with Crystal and Goodman having great chemistry and delivery that rivals that of the film’s predecessor twelve years earlier. The other members of Oozma Kappa – “senior student” Don Carlton, socially awkward Scott “Squishy” Squibbles, the two-headed monster(s) Terry and Terri Perry, and the fuzzy and laid-back Art – are also funny and well-acted.

In terms of animation, the film is a complete delight. The original Monsters, Inc. still holds up surprisingly well, but Monsters University takes all the fur, scales, and claws of its predecessor and polishes them to new levels. The designs for the monsters and detailed artwork are a treat for the eyes.

Along with the aforementioned missed opportunity with Randall’s character, the only major flaw with Monsters University is its unambitious nature. The story is fun and entertaining, but doesn’t exactly boast the same originality and depth that you usually associate with Pixar (save for a small twist towards the end). And again, it lacks the emotional strengths of Pixar’s better works (you may remember the young girl Boo from the first film, and the heart she gave it. That heart doesn’t ring nearly as loudly here).

So Monsters University is a safe and mostly predictable prequel (though considering we all know where the characters end up in prequels, what prequel isn’t predictable?), but it is a very fun and charming story that younger audiences will particularly enjoy. And that fun and charm are strong enough that older audiences should have a good time as well, even if it isn’t among Pixar’s best.

One thought on “Monsters University Review”