Walt Disney Animation Studios has never been better than it is right now. 2009’s The Princess and the Frog seemed to reignite the animation studio’s creative output, and they followed it up with films like Tangled, Wreck-It Ralph and Big Hero 6, which are stronger and more character-driven features than most Disney animations from the past, and Frozen, which has sent Disney’s modern filmmaking reputation into the stratosphere. But with this new reputation comes expectations. It should be reassuring to know that Disney’s latest animated feature, Zootopia, meets those expectations.

Zootopia serves as something of a reinvention of Disney’s “talking animals” genre, much like Frozen and Tangled reinvented their princess genre. While past talking animal films from Disney have either been just that, animals that can talk, or animals who act like humans in an otherwise familiar world, Zootopia instead creates a unique, animal-centric world that takes full advantage of the concept.

The titular Zootopia is a sprawling city where mammals have evolved to be more like humans. It is separated into different districts based on differing geographical locations, and the behavioral characteristics of every animal are accounted for in different ways (hippos may get to work via river, for example, while small rodents get to the same location by way of tube). The world of Zootopia is as much a character as the characters themselves.

Speaking of characters, Zootopia gives us two memorable leads. Judy Hopps (Ginnifer Goodwin) is a rabbit who has become Zootopia’s first ever “bunny cop,” and remains optimistic that said distinction will help her make a difference in Zootopia. Meanwhile, Nick Wilde (Jason Bateman) is a fox and con artist who’s as slick as he is cynical.

The film works as a kind of oddball buddy comedy, with Judy reluctantly seeking Nick’s help in solving a major case. Both of the main characters can easily win audiences over, and their interactions and chemistry rank as some of the best in any Disney animated film. 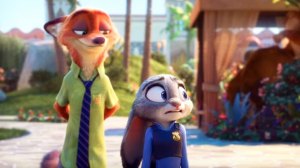 Zootopia is wise to keep the focus on the two leads and not giving them a comedic sidekick to take away from the dynamic (Judy and Nick are funny enough on their own). With that said, the various secondary and side characters can prove to be just as entertaining, from the humorous sloths who work at the DMV, to Zootopia’s boisterous mayor Lionheart (voiced with the booming vocals of J.K Simmons). The sole exception is a gazelle popstar named Gazelle (voiced by Shakira), who seems to exist solely to get a musical celebrity in the film’s credits.

Between the creativity of the film’s world and the enjoyment provided by the characters who litter it, Zootopia is one of the most consistently enjoyable Disney films I can remember.

Also of note is that Zootopia continues Disney’s recent trend of deeper context within the film’s story, like Frozen and Big Hero 6 before it. The themes are a bit more overt here, but nonetheless appreciated and meaningful, with rather adult subjects like prejudice and stereotyping being prominent in Zootopia.

Prey and predators have long since found harmony in Zootopia’s world, but fear, bigotry and misunderstanding still exist between them. Even Judy, who tries to maintain an open mind, encounters some problems with working alongside a fox. It’s too blunt to have the same kinds of interpretive elements of Frozen, but a Disney movie dealing with deeper subjects like these is still wonderful to see. No Disney movie from any past generation of the studio would dare touch on some of the themes on display here.

Perhaps best of all, Zootopia tells this meaningful story while still being thoroughly entertaining. The film is the funniest to come from Disney since The Emperor’s New Groove, with clever writing, smart jokes, and the best references to fellow Disney flicks in the studio’s history (Frozen in particular is referenced numerous times, both subtly and overtly).

On the downside, the case that Judy and Nick are trying to solve, which serves as the foundation of the plot, begins better than it ends, as the mysteries behind it become a bit too obvious and predictable sooner than they should. Some might argue that this is primarily a “kids movie,” and to not expect many big surprises. But Frozen’s plot twist still remains one of the few times a movie caught me completely off-guard. Considering that Zootopia’s plot is built around a police investigation, it would be nice if some of that same sense of surprise could have carried over.

That’s a small price to pay, however, when one considers that, on the whole, Zootopia is one of the most entertaining features Disney has ever made. It doesn’t quite reach the heights of some of its immediate predecessors, but its clever world, likable characters, beautiful animation, sharp sense of humor and strong themes elevate it to being one of the Disney greats.