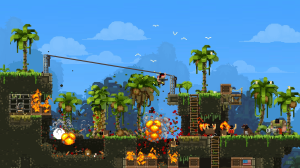 If the action movies of the 80s and 90s and retro video games had a baby, it would be Broforce. The 2015 indie title is equal parts pastiche and parody of many of the beloved action films from the past couple of decades, as well as the run-n-gun video games of yesteryear, that seem more and more ridiculous as time goes on.

Broforce has a simple enough setup. Players take control of a “Bro,” a comically machismo action commando, and shoot their way to the end of a level (the ending signified, of course, by getting to the chopper). The two things that prevent Broforce’s gameplay from being completely mindless, however, are the level design and the Bros themselves.

The game uses a retro, pixelated graphical style, and like the visually similar Terraria, levels are almost entirely destructible. Aside from ladders and a few metal platforms (whose destruction would render many levels unbeatable), every piece of a level can be destroyed. The rapid gunfire of the player as well as that of the enemy terrorists can eat away at levels, often times giving players alternate routes.

Then we have the Bros, who are all parodies of action movie characters (mainly from the 80s and 90s, but a handful of characters from the 2000s are spoofed as well), but with their names “Bro-ified.” The starting character, a riff on Rambo, is named Rambro. Meanwhile, Robocop becomes Brobocop, Indiana Jones becomes Indiana Brones, Conan the Barbarian becomes Bronan the Brobarian and, humorously, Diehard’s John McClane simply becomes Brohard. To name just a few of the Bros. 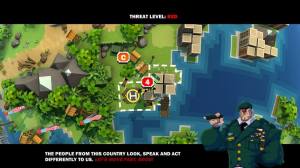 There are dozens of Bros in the game, and aside from adding to the game’s fun personality, each one plays differently. Each Bro has a unique weapon, as well as a unique special move, the latter of which having limited uses. Though all Bros are taken out in a single hit.

Broforce has an interesting lives system, as players will start a level as a random Bro (once others have been unlocked), and can rescue their fellow Bros throughout the levels. Each Bro works as an extra life within that level, so when one Bro goes down, another takes his place. Brand new Bros are unlocked whenever you rescue a set number of Bros within the levels (completing a stage will let you know how many more Bros need rescuing before unlocking a new one).

This system is both a blessing and a curse. On the plus side, starting a level and coming back to life as a random Bro adds an element of improvisation onto the mix. You may feel a certain area might be easier with the skills of a certain Bro, but you have to work with what you have instead. On the downside, players also automatically switch to the Bros they rescue. So if you’re having fun playing as your current Bro, you’ll be forced to switch to another even if you just want an extra life.

The game supports online multiplayer, and though things can get incredibly chaotic when playing with more people (expect many accidental deaths as your fellow players destroy the level around you), this is perhaps Broforce at its most fun. The game is already ridiculous, and adding in the chaos of multiplayer only takes things to the next level of ridiculousness. Not to mention it makes some of the extremely difficult boss fights just a bit less difficult.

There are some notable technical issues that hold Broforce back from true greatness, however. The load times can often take a while, and can even become annoyingly lengthy at times. Things also slow down considerably when there’s a lot going on on-screen, and there’s a weird issue where the character will stop in their tracks for a few seconds after you take your first few steps within a level (if this were a rarer occurrence it would still be an problem, but what makes it a big misstep is that it has literally happened to me within every single level without fail). These later two technical issues are especially cumbersome in later levels of the game’s campaign, seeing as threats become more excessive and more immediate, meaning these issues make already difficult segments all the more difficult.

Still, Broforce should provide more fun than frustration, especially with friends. The simple and fun gameplay, coupled with its often hilarious personality, make it a worthwhile tribute to the action movies it parodies (the light on top of the PS4 controller will even glow red, white and blue upon completing a level). And just like the movies that inspired it, Broforce may not have a whole lot of depth, but it is a ridiculously, stupidly good time.