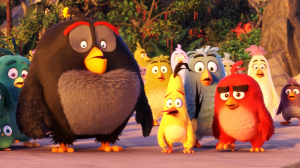 Perhaps Hell has just frozen over, because The Angry Birds Movie is surprisingly decent. It’s far from great, mind you, but considering this is a movie based on a cell phone app, it could be a whole lot worse. And when one considers that Ratchet and Clank – a full-on video game that has been screaming to be an animated feature for over a decade – recently made a disappointing transition to the big screen, it’s all the more surprising that Angry Birds and all of its simplicity would be one of the better examples of a game to movie adaptation.

Maybe it’s because of that simplicity that Angry Birds makes such an easy transition, since this isn’t a movie with any grand scale, deeper context, or even very much emotional impact. It’s just here for a few laughs and some pure entertainment. It plays closer to old cartoons like Looney Tunes or Tom and Jerry than the more sophisticated animated features of today. In this regard, The Angry Birds Movie is mostly a success.

The movie is set on the bluntly-named Bird Island, which is inhabited by flightless birds, who are a bit too happy most of the time. The few birds who aren’t so perpetually happy are sent to anger management classes, and that is where the film’s hero Red (Jason Sudeikis) is sent after he loses his cool one too many times.

At his anger management courses, Red meets fellow “Angry Birds” Chuck (Josh Gad) and Bomb (Danny McBride), the former is exceptionally fast, and the latter literally blows up when upset. After a group of green pigs, lead by the portly Leonard (Bill Hader) arrive on the island – destroying Red’s house in the process – and become chummy with most of the bird community, Red becomes suspicious of the pigs and their increasingly inconsistent explanations for their visit. Red, along with Chuck and Bomb, set out to find the truth about the pigs, and put a stop to whatever plot they may be concocting.

Again, this is a really simple movie, but the setup does provide plenty of opportunities for laughs. And while the movie is geared more for younger audiences, some of the jokes can be appreciated by the older crowd (with some subtle and not-so subtle gags targeted directly towards adult audiences). The writing doesn’t stack up to the better animated films of today, but if you just want some good laughs, it does the job. Though I could have done without some of the bathroom humor in the film (but again, I’m not exactly the target audience here).

The Angry Birds Movie also boasts some fun visuals. The simplistic characters from the game are somewhat fleshed out with their designs, and their bright colors and odd shapes help give the film a visual liveliness. I especially liked the goofy simplicity of the pigs.

Another highlight of the film is the voice work. This is a surprisingly well-cast film, with the actors bringing out the appropriate humor of their respective characters. Josh Gad and Bill Hader’s performances are particularly funny (though they may also remind you that you could be watching greater animation like Frozen or Inside Out), and Peter DInklage provides similarly humorous vocals to the Mighty Eagle, Bird Island’s resident folk hero and only bird of flight.