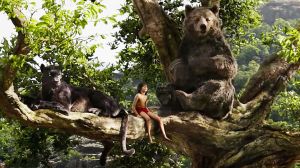 Though The Jungle Book is the most recent in a string of Disney animation-to-live-action adaptations, there’s actually very little live-action in the film. Mowgli (Neel Sethi) is the only live actor seen on-screen. Everyone else is a motion-captured animal, and even the environments are created through computers.

Turning The Jungle Book into a visual effects-heavy movie turned out to be a wise choice on Disney and director Jon Favreau’s part, as this is one of the most visually arresting films of recent years. The CG animals are some of the most believable to be put on screen, and you’d certainly be forgiven for thinking the film was shot in the jungles of India and not a studio in Los Angeles.

Perhaps the best thing about this Jungle Book is that, despite the stunning visuals, it also tells its story better than past adaptations. The story remains that Mowgli is a young human boy who was orphaned as an infant, and after being found by the panther Bagheera (Ben Kingsley), he was raised by a pack of wolves in the deep of the jungle, with a wolf named Raksha (Lupita Nyong’o) serving as his mother. 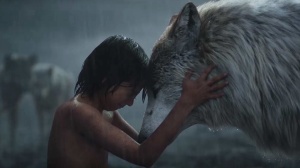 Though the wolves accept Mowgli as one of their own, and Bagheera becomes something of a protector to the boy, not every animal in the jungle embraces a human living among them. A tiger named Shere Khan (Idris Elba), who is feared by all other animals in the jungle, bears a deep hatred of humans. Shere Khan threatens the animals of the jungle that unless the boy is handed over to him, he will continue to kill. The wolves, not wanting to see anyone get hurt, reluctantly agree to send Mowgli to the nearest human village, which is the only place he’ll be safe from Shere Khan. Bagheera is assigned to escort Mowgli to the village, and along the way, they are accompanied by the lovable bear Baloo (Bill Murray).

It’s certainly familiar to anyone accustomed to the Kipling stories or the Disney animated feature, but the film is consistently entertaining, and the characters are given enough emotional depth to help it stand on its own. This is all the more emphasized by the performances of the actors. 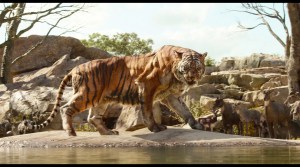 Ben Kingsley, Bill Murray, and Idris Elba are all highlights of the film, and help bring a new sense of life to these classic characters. Smaller (but no less memorable) roles come in the forms of Kaa the snake (Scarlett Johansson) and King Louie (Christopher Walken), who has been reimagined from an orangutan to a not-so-extinct gigantopithecus.

Between the fun and sometimes heartwarming story, and the performances, The Jungle Book becomes more than just a fancy visual effects movie, and instead is a story that is equal to the visuals that bring it to life. Just for good measure, we even get two songs from the Disney animated film brought back for good measure (“Baer Necessities” and “I Wanna be Like You”), with a third (“Trust in Me”) showing up in the credits.

Though it may not boast many surprises, The Jungle Book is nonetheless a winning feature that’s as fun as it is beautiful to look at. It’s also the first of Disney’s recent sub-genre of animation turned live-action to live up to its potential. Though it may not be a coincidence that, aside from Mowgli, the film is primarily animated.