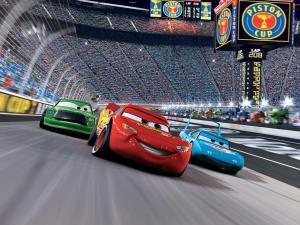 2006’s Cars was an interesting release for Pixar Animation Studios. The animation giant had found early success with the Toy Story movies, and later created cultural phenomenons with the releases of Finding Nemo and The Incredibles in the early 2000s. Cars was, by comparison, a modest critical and commercial success, with many claiming it to be Pixar’s weakest film up to that point. While Cars may not hold up as a classic – as many of the better Pixar films do so effortlessly – it is perhaps better than its reputation suggests.

Much like A Bug’s Life or Brave, Cars’ status in the Pixar canon may be a simple case of a good movie being produced by a studio that usually churns out great ones (either that, or its dreadful sequel – Pixar’s only flat-out dud – may have sullied audiences’ perception of the franchise entirely). There’s nothing innately wrong with Cars, but it just doesn’t evoke that sense of something special that Pixar has excelled at with alarming consistency.

The film takes place in a world inhabited entirely by anthropomorphic automobiles. Admittedly, it’s the most restricting premise of any Pixar film. There’s only so much you can work with in terms of how to animate car characters, and there’s only so many ways to make them relatable. When compared to the underwater beauty of Finding Nemo, or the complexity of human characters in The Incredibles, it’s a bit understandable why Cars may have seemed underwhelming upon release. But story-wise, Cars is a solid film.

The story centers on Lightning McQueen (Owen Wilson), a hotshot rookie race car who has found his way into a three way race against veteran Strip “The King” Weathers and obnoxious rival Chick Hicks for the prestigious Piston Cup. But on his way to the big race, Lightning is accidentally sent off-course, and ends up lost on Route 66. Lightning later finds himself stuck in the small town of Radiator Springs, after he inadvertently damages the town’s roads and is sentenced to repair them.

It’s a really simple story that manages to bring out the charm and humor in the characters, despite the aforementioned limitations of them being cars. It may lack the profoundness of Pixar’s greater films, but it still does showcase some good messages for younger audiences.

In terms of animation, Cars is still a pretty film to look at. Once again, the premise does prevent it from having the same visual inventiveness of many of the studio’s other works, but Pixar definitely made the best of what they had, with a stunning attention to detail in the environments, and managing to squeeze out as much variety in the character designs as possible.

Perhaps one of the more love it or hate it aspects of Cars is its heavy use of licensed music. Cars remains the only Pixar movie to rely heavily on pre-existing songs by contemporary musicians for its soundtrack (even Cars 2 didn’t follow suit), and while one’s personal taste on the music is entirely subjective (I myself don’t mind the song selection), its presence does prevent Cars from feeling as timeless as many of its Pixar peers. Though the use of popular music in animation was all the rage during the 2000s (a trend that still continues, though not as prominently), this was yet another trend that Pixar seemed to actively avoid, yet succumbed to in this one instance, which can make it feel out of place (and maybe even a little dated) in the Pixar canon.

Still, it’s hard to be too harsh on Cars. Even with its status as a “weaker” Pixar film, it’s still a thoroughly enjoyable piece of entertainment with some sharp writing, great visuals and voice work (particularly that of Paul Newman), and a good amount of heart (the key ingredient its sequel lacked). Perhaps it’s far from Pixar’s finest, but it remains a solidly entertaining film for younger and older audiences alike.