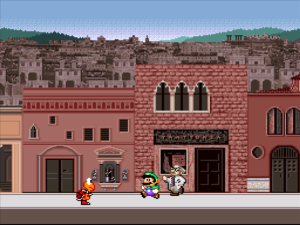 There are many reasons why the Super Mario series holds such a lofty status in the world of video games, with one of the biggest of those reasons being its versatility. Throughout the years, the Mario series has weaved its way into various genres to great success. The Mario Kart series is probably the most famous such sub-series, while the Mario RPGs have created adventures that rival the core platformers of the series. Even sports genres like tennis and golf have benefitted from having the Mario characters crossover into them. But there is one genre that Mario could not successfully transition to, even through multiple attempts: edutainment.

During the earlier part of the 1990s, Nintendo licensed a number of developers to create “educational” Mario games, all of them falling flat. There is arguably no more infamous example of this experiment than 1992’s Mario is Missing.

Nintendo likes to boast 2001’s GameCube launch title Luigi’s Mansion as the first time Luigi had the spotlight ahead of his more famous, red-clad brother. The truth is that Mario is Missing beat it to the punch by nine years, as this marked the first time Luigi was the sole playable character in a Mario game, as Mario himself has been kidnapped by Bowser. You can’t really blame Nintendo for rewriting history, however, because this was one awful debut for Luigi as a leading man.

How does one even begin to describe Mario is Missing? Well, as previously stated, it is an attempt at creating an educational Mario game, with the key word there being attempt. After Mario is kidnapped, Luigi travels to Bowser’s castle in Antarctica to rescue him. Yes, Bowser’s castle is inexplicably in Antarctica, and this game takes place not in the Mushroom Kingdom, Dinosaur Land, or any fun, imaginative world we’d grown accustomed to in Mario games, but in the real world. How fun…

Bowser’s castle contains three floors (think of them as worlds), with each floor containing five doors to different real world locations (think of them as levels). After all five levels in a world have been cleared, Luigi must face a “boss fight” (note the quotation marks) in order to get one step closer to rescuing Mario.

As soon as you enter a door and walk into a real-world location, the game looks somewhat like a traditional Mario sidescroller, with Luigi even boasting a similar sprite to that of Super Mario World (though his overalls look more purple here than blue). There are even Koopa Troopas running about the place.

That’s about where all similarities to anything relating to a real Mario game stop though. The environments, as you might expect, look as similar to their real-world counterparts as they can, given the 16-bit limitations. More alarming are the presence of five generic passersby in every level (always the same five passersby mind you. These people really get around). Luigi still has to jump on Koopa Troopas though, as three randomly-placed Koopas on each level contain an “artifact,” which are necessary to move forward in the game.

Here’s where things get really baffling. In order to return these artifacts to their rightful places, Luigi must find the landmark they belong to and speak to the woman at the information booth (who looks suspiciously like Princess Peach) at each landmark. But Luigi can’t just speak to the woman at the information booth at any time, with the presumptive reason being that he’s too short to reach her window. The Mario Bros. were never that short! And why does it even matter? It’s not like he’s trying to get on a roller coaster or something.

So how does Luigi reach the window? By riding on top of Yoshi, of course! And how do you get a hold of Yoshi? By first discovering where you are on Earth so Yoshi can find you! You can find out your current location by asking the aforementioned passersby where you are, to which they always drop a hint (because why give a direct answer?). If you’ve figured it out, then you pause the game, go to a world map menu where you control Yoshi, and bring him to your current whereabouts (or if you’re playing today, you can read up the locations online and save yourself this cumbersome first step).

I will admit, this world map is one of the few things in the game I like, because it is literally a map of the continents of the Earth reworked into the style of Super Mario World’s world map. The cleverness stops there though, since the game doesn’t bother to do anything creative with Yoshi whether you get the location right or wrong. You just un-pause and either Luigi will suddenly be riding Yoshi or not. And all Yoshi does is make you move slightly faster and boost you high enough to talk to the woman at the information booths.

Once you’ve reach the required height to communicate, you can return the artifacts you’ve found to the information booth if you can at first answer two questions about the landmark. At this point you can enter the landmark to snap a photo. Once all three artifacts are returned, you need to backtrack to the blue pipe you came out of at the start of the level (Bowser’s doors apparently lead to pipes), and then you repeat this process ad nauseam. It is one of the most tedious setups I have ever seen in a game, and it’s made all the worse by the mechanics of the game itself.

For starters, there’s Luigi’s jumping. You would think with all the Mario games that the developers could have referenced for smooth jumping controls, that it shouldn’t be so difficult to pull off. But Luigi’s jumping here feels incredibly stiff and slow, to the point that you may wonder if anyone involved with the game’s development had ever played a Mario game before. Another weird thing about the jumping is that the perspective doesn’t seem to mean anything, as Koopa Troopas often appear to be in the background behind Luigi, yet you can still jump on them as if they were right in front of you. You can’t die either, so I guess the Koopas can’t hit you from where they are, even though you can hit them.

Even worse than all of this are the mechanics involving the stage progression. As if the process of it all wasn’t convoluted enough, the levels themselves are almost maze-like, with Luigi getting to the different sections of a stage by crossing the street to go into the background or foreground. You must be standing directly in the center of the sidewalk when you do this though, which just makes things that much more tedious. To add insult to injury, in order to remember where you, the landmarks, the passersby and the Koopa Troopas are, you have to repeatedly pause the game and look at a map. This level map is different from the Yoshi one, mind you, and looks a lot more cluttered.

Another annoyance comes from just trying to talk to people. You would think you would just have to press a button when you’re close to them, like in any reasonable game, but you’d be wrong. You have to stand directly in front of them, while facing them, and then press the button. This isn’t so easy considering these people are constantly moving. Luigi just can’t catch a break when it comes to talking to people, can he?

Once you’ve finally managed to get the artifacts and Yoshi, some of the most frustrating mechanics of rear their ugly heads. For one thing, Luigi can only trade the most recently obtained artifact. So let’s say you’ve picked up artifacts A, B and C, and are right next to the landmark that relates to artifact B, you can’t trade it in right there. Instead you have to drag yourself all the way to landmark C and trade that one in first. You do have the option of getting one artifact at a time and trading them in piece by piece, but that also means after you’ve completed one artifact you have to backtrack, find the right Koopa Troopas, and repeat the process all over again. No matter how you tackle it, it’s obnoxiously tedious.

Even the questions at the information booth can be a pain. Yes, this is an educational game for kids, so the questions are generally really easy. But every now and again they’ll throw you an odd one like “Amazingly, the pyramids of Egypt were built without —-” with some potential answers being “nails” (the correct choice) and “air conditioning.” So if “nails” is the the only correct answer, does that imply that ancient Egyptians did indeed have air conditioning? That’s real educational. Worse still, if you get the wrong answer to a question, you have to wait about ten seconds before you can talk to the woman at the information booth again, which just drags this whole mess out just that much longer.

Perhaps worst of all is that, when a world is all done and you think you may be rewarded with a boss fight that may resemble something fun, all the bosses do is go back and forth over and over and over again. They also can’t kill you, so they’re basically just waiting for you to jump on their heads a few times while they run around aimlessly. It’s exactly the same for all three bosses: Ludwig, Iggy and Roy. Yes, Roy is the final boss, and Bowser is just taken out in a cinematic. He didn’t even want to bother this time around.

In short, Mario is Missing fails tremendously as both a video game and an educational experience. It’s unrelentingly tedious, and doesn’t even play well. There have been other bad Mario games through the years, but even they usually have some redeeming attributes. But it is honestly difficult to find much of anything to praise about Mario is Missing (though I suppose I did enjoy some of the music tracks, which humorously remix Super Mario World themes in the styles of particular countries). And it’s made all the more painful by the fact that it drags the Mario series into this mess.

I’m starting to think Mario purposefully went missing, as a means to avoid starring in this stinker of a game.

2 thoughts on “Mario is Missing Review”