Though Blizzard is most famous for its three premiere franchises – Warcraft, Starcraft and Diablo – it’s about time that trio got promoted to a quartet. Enter Overwatch, Blizzard’s newest IP and the developer’s answer to the competitive shooter genre. The end result of Overwatch is the best game the genre has produced since Team Fortress 2.

The most immediate thing that players are bound to notice about Overwatch is its personality, which is bursting at the seams in both its characters and setting. Whereas many shooters take place in war-torn, apocalyptic futures, Overwatch takes those grim tropes and gives them an optimistic facelift. 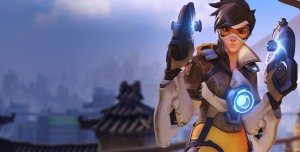 While Overwatch still takes place in a future following a worldwide crisis, it is set during a time when humanity has picked itself back up and began rebuilding the world, giving it a fresh twist. The more optimistic tone is magnified by the game’s brilliantly cartoonish visuals, which outperform the animated characters of Team Fortress 2 with a cast that feels like a cross between Disney and anime characters. 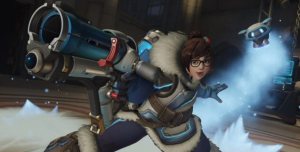 Overwatch currently contains twenty-seven different heroes for players to choose from, with each one having a distinct play style, which is complimented and influenced by their personalities: The game’s mascot, Tracer, is a spunky British girl who can teleport and reverse time by a few brief seconds to get out of tight spots. Torbjorn is a Swedish engineer who bears a resemblance to Gimli from The Lord of the Rings, and builds turrets to defend against enemies, and shields to aid allies. Junkrat is a cross between the Joker and the War Boys from Mad Max: Fury Road, who uses bear traps and explosive mines to take out foes. D.Va is a Korean superstar who pilots a giant mech suit. McCree is a spoof of Clint Eastwood who uses western firearms. Mei (my personal favorite) is a cute, bubbly Chinese scientist who uses ice-based weaponry for both offense and defense.

The list goes on and on, with each and every character giving the gameplay a great sense of variety while simultaneously adding to the game’s animated tone. Getting to know each character only takes a matter of minutes (every character has their unique weapon, two special moves, and one powerful “ultimate” ability, which builds up over time based on the player’s performance). But becoming an expert with the different characters will take a bit more time, giving the game a great sense of “easy to learn, difficult to master.”

Perhaps Overwatch’s most pleasant surprise is how balanced it all feels. With so many characters to juggle, you might expect a character or two to feel overpowered, or another one to feel like the lame duck. But that’s never the case here, as different characters show their strengths in different situations and stages, without any of them feeling at a severe disadvantage at any point. 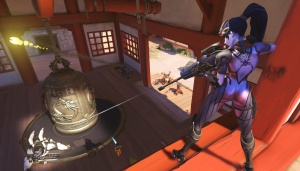 In terms of game modes, Overwatch admittedly doesn’t have a whole lot of newness to it, utilizing standard setups for team-based FPSs, but everything that is here is extremely polished and well executed. Some maps have teams competing for neutral control points, and then fighting for dominance over said points for an allotted time. Others see one team playing defense as they protect a series of control points from the opposing team. Then there are maps which flip that concept around, with one team escorting a payload to various checkpoints, with the other team trying to stop them.

Additionally, players can also partake in Arcade modes, special modes that switch up the rules (death matches where characters are locked out after victories, respawning as random heroes, everyone can pick the same hero, etc.).  The arcade modes change daily (as well as a weekly Arcade Mode), always giving players a good dose of variety in gameplay. 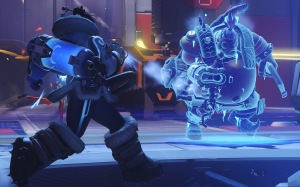 Players gain experience points based on their performances in a match, and upon leveling up,  gain crates that can be opened to unlock four random customization items, which range from character colors, costumes, lines of dialogue, spray paints (with which you can decorate walls), player emblems, victory poses and taunts. The randomness of your rewards will keep you coming back to try and unlock the customizations you want, adding to the game’s already stellar replay value. Of course, you also have the option of purchasing your desired items, but the only way to earn gold is by randomly getting it from the crates. So either way you have to work for your rewards.

Graphically, the game is gorgeous to look at, with the well-animated characters being complimented by vibrant, colorful environments. I already described the characters as a mix of Disney and anime, but that comparison really applies to the game as a whole. Blizzard has created a wonderfully animated world that feels both new and familiar.

Blizzard has been given a new sense of life with Overwatch. It’s an immensely fun multiplayer shooter that expresses a playfulness and sense of personality that Blizzard’s longstanding trio never could. It’s exciting to think of what Blizzard can come up with for the world of Overwatch in the future. But for now, we can all just relish in what Blizzard has achieved here. Between the sheer fun Overwatch provides, its replay value and bountiful charms, it will have us coming back for more for a good, long while.