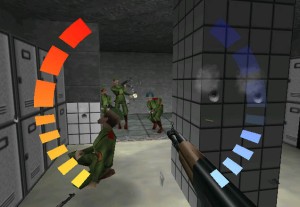 Goldeneye 007 was not only the most acclaimed game in Rare’s illustrious library back when it was released on the Nintendo 64 in 1997, but one of the most revolutionary video games ever made. Few would argue that it’s the most influential licensed video game of all time, as it singlehandedly popularized the idea of multiplayer first-person shooters appearing on home consoles. Simply put, without Goldeneye 007, it’s very likely that the FPS genre wouldn’t have risen to the unparalleled popularity it has with the likes of Halo and Call of Duty in the decade that followed in Goldeneye’s wake.

Goldeneye had a solid single player campaign modeled after the James Bond film of the same name, but it was with its multiplayer mode – which was shockingly thrown in development at the last minute – that gave Goldeneye 007 the most praise and its long-standing acclaim. I myself can remember spending countless hours with Goldeneye back in the day.

So how does this legendary title hold up after all these years?

Not very well… at all.

If you go into Goldeneye 007 with knowledge of everything it accomplished, you can see it as the trailblazer it was. And if you’re old enough to have played it back in 1997, you may get a good dose of nostalgia out of it, especially when playing with friends. The sad truth, however, is that its outdated control scheme and ugly visuals really make the game feel like a relic, as opposed to a timeless treasure.

The gameplay would be considered mediocre by today’s standards. Though Goldeneye set the stage for the future of the genre, it can’t help but feel vanilla when compared to more contemporary FPS titles. The fact that so many games have built on its gameplay may make it seem a bit more forgivable that it feels so basic when playing today, but what’s less forgivable is the control scheme.

The sense of control in Goldeneye 007 just feels clunky and stiff. By default, the joystick moves the character, the C buttons look around, A and B cycle through weapons, and Z shoots. In description it may not sound too bad, but in execution it just feels so awkward. Your hands keep scampering around the controller like it’s some Rubik’s Cube-like puzzle.

Then there are the more baffling control options. You press down on the D pad to crouch, but you can’t move while doing it. In order to move while crouched, you have to hold the R button and press the down C button. The controls for crouching and moving feel weird enough, but the fact that you have a whole other means to just crouch without the addition of movement is just unnecessary. 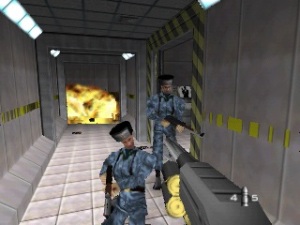 Worse still is aiming, which you normally do by holding the R button, which locks the character in place so the joystick movements control their crosshairs. Not only is the aiming overly sensitive (with the slightest jolt of the joystick making your character dramatically change focus) but you can’t even do it while crouching. If you press R when crouched, you just stand back up. This leads you to constantly be switching between crouching, standing and aiming even when you only wish to do one of these actions.

It seems like I’ve mentioned the crouching an awful lot, hasn’t it? That’s because crouching seems absolutely vital when playing multiplayer, since it makes you harder to hit, and somehow seems to make your aim slightly more accurate, despite the slower movement. It’s an odd quirk, to be sure. Not necessarily a bad thing in its own right, but the messy controls turn it into something cumbersome.

Now, it is possible to select different control schemes in the game, but they seem even more confusing than the standard controls. Playing Goldeneye again, I was honestly baffled that this was the same game I played so much during my youth. I don’t know how my younger self put up with these controls for so long.

As bad as the controls are, the visuals are equally so. Some would argue that an N64 game’s visuals not holding up doesn’t warrant too harsh of criticism, seeing as it’s generation was just entering into the third dimension, and things were bound to be experimental. But considering that games like Super Mario 64, Ocarina of Time and Banjo-Kazooie are still fun to look at despite their obvious age, I don’t feel too bad about saying that Goldeneye’s visuals have aged like milk, and are downright painful to look at. 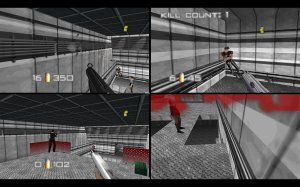 Aside from the characters looking blocky (the more forgivable side to the visuals’ aging), the environments are often way too dark to see what’s going on. And when you can see, the levels all lack so much visual distinctiveness that you often get lost within all the similarities in the stages. Guns look like tiny black or silver blobs on the ground, and throwing knives disappear from your sight when thrown (good luck aiming with those suckers).

On the brighter side of things, the musical score by Grant Kirkhope is still pretty darn cool. It really captures the James Bond feel, and a good number of tracks get stuck in your head. It may not reach the iconic heights of Kirkhope’s later Banjo-Kazooie soundtracks, but Goldeneye’s score definitely holds up a great deal better than the rest of the game.

Other highlights include the variety found in the single player campaign (though the experience is still hampered by the controls), and you may get a few nostalgic giggles when playing multiplayer with a few friends.

Goldeneye 007 was never a bad game, but it is a game that has aged very, very badly. Those who played it back in the day who wish to revisit it will probably find themselves severely disappointed, while newcomers may be outright dumbfounded that this was once considered one of the greatest video games of all time.

Yes, Goldeneye 007 was influential, and that can’t be understated. But the FPS genre has provided far superior experiences in the years since. Play it for the memories, if you must. But to pick Goldeneye 007 over something like Overwatch or Team Fortress 2 would be a big misstep.