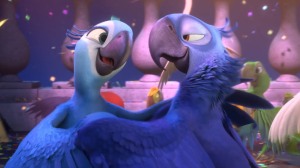 2014’s Rio 2 was an interesting entry in Blue Sky Studio’s animated output. Up until that point, Ice Age was the only one of their films to spawn a franchise with multiple entries. The Ice Age sequels haven’t been particularly memorable, but just how did Rio’s second outing fare?

Well, the short answer is that Rio 2 probably stands on its own better than most of the seemingly endless Ice Age sequels, but it still falls short of its predecessor. Rio 2 isn’t a bad movie, but it is overly familiar, and a bit overstuffed.

The story here is that the rare blue Spix’s macaws Blu (Jessie Eisenberg) and Jewel (Anne Hathaway), believed to be the last of their kind in the first film, have now started a family, with three children named Carla, Tiago and Bia. The macaw family lives peacefully in their bird sanctuary in Rio de Janeiro, owned by Blu’s former owner Linda (Leslie Mann) and Tulio, who are now married.

Admittedly, the film gets off to a pretty good start, with the plot involving Linda and Tulio finding signs of other blue Spix’s macaws living in the Amazon during an exhibition, and seek to find further proof of the species in order to help preserve them and their habitat. Jewel is also eager to find more of her species, and convinces Blu and their children to come along as they fly to the Amazon (Blu uses one of Linda’s GPSs, which he carries via fanny pack).

It shouldn’t come as too much of a surprise that more blue Spix’s macaws are indeed found, but they are found by Blu and Jewel, as the macaws don’t trust humans and wish to hide away. This tribe of macaws is lead by Eduardo (Andy Garcia), who as it turns out is Jewel’s father. As you might expect, Blu and Eduardo often butt heads, seeing as Blu spent 15 years as the pet of a human.

Meanwhile, trouble is brewing in the Amazon, as an illegal logging operation threatens the blue Spix’s macaws habitat, and Blu’s family is unknowingly stalked  by Nigel (Jemaine Clement), the antagonistic cockatoo from the first film who is now flightless, due to the events of that film’s finale.

The setup for everything works well enough, but problems arise when it quickly becomes apparent that there’s just too much going on. Basically all of the side characters from the first Rio manage to find their way into the sequel, and even more new characters are introduced, leading to a small army of subplots that often break the flow of the film.

Rio 2 still features a few catchy songs (though like in the first film, they are strangely spread out), and some of the new characters work (Nigel is now accompanied by a poison dart frog who is in love with him, as well as a Chaplin-esque anteater. And Nigel himself seems more comical this time around). The animation is as colorful as ever, with the Amazon setting proving to be a ripe opportunity to dabble in lush scenery and fun animal character designs.

But Rio 2 ultimately stumbles for recycling far too many elements from the first film at the expense of any meaningful differences, and for simply having too much going on than its running time can handle. Some of the new characters (such as a macaw named Roberto, an old flame of Jewel’s and somewhat-rival to Blu) seem completely unnecessary and only detract from the plot. Then we have so many subplots going on that they get lost in the shuffle. The film bounces back and forth between so many different goings-on, that there’s probably just as much filler in the film as there is actual story.

With all that said, I didn’t hate Rio 2. It’s a decent enough film for younger audiences, but it falls into the old sequel trap of wanting more of everything while also calling back to its predecessor that it would probably fail to captivate the older crowd. It could be a lot worse, but it doesn’t even quite reach the same heights as the first Rio, let alone better it.