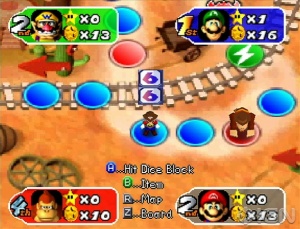 The Mario Party series has seen many, many iterations since the release of its first entry in 1999. Though the series’ annual releases eventually meant the games would eventually be watered down (even now that the releases are no longer annual, the newest entries are frowned upon more than ever), the original N64 trilogy is fondly remembered. Perhaps none more so than the second installment, which was released in 2000.

Mario Party is a rather easy series to summarize: Players take control of a different character from the Mario universe (here including Mario, Luigi, Princess Peach, Yoshi, Wario and Donkey Kong), and take turns moving across board game-inspired levels, with mini-games spread throughout after each player has taken a turn. The basic goal of Mario Party is to have more stars than the other players by the time the game is over.

Just like any real board game, things are a bit more complicated when you go into detail. Stars are normally obtained by reaching Toad on the game board, and paying 20 coins to purchase it. Additionally, stars can be stolen from other players by passing by Boo (or summoning him through one of the game’s items), and additional stars are awarded at the end of the game for accumulating the most coins, winning the most coins in mini-games, and landing on the most “Happening Spaces” (green spaces on the game board that activate the level’s different gimmicks), should you choose to have these bonuses enabled. If players tie for the most stars, the tying player with the most coins is the winner.

Coins are obtained by landing on one of the many blue spaces on the game boards, while landing on red spaces takes them away. Coins are also earned by winning mini-games or stealing them with Boo. There’s also the bank space, which forces players to surrender five coins every time they pass it, but should a player be lucky enough to land directly on the bank space, they are awarded with every accumulated coin in the bank.

Players must also be wary of the Bowser spaces on the board, as landing on them could end with Bowser messing with the players, stealing their stars and coins for himself.

Those are the basic rules of Mario Party, though each board also has their own share of gimmicks and themes (in Mario Party 2, we have a western world, a haunted world, and a space world, to name just three of the six boards featured). The boards all change up the formula slightly, with different layouts and different results from landing on the aforementioned Happening spaces. 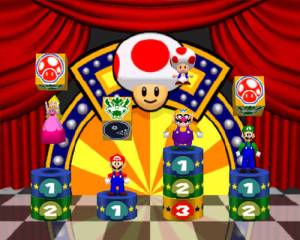 The mini-games are where the action really picks up though. Mini-games come in a host of varieties, with 4-player free-for-alls, team-based two-on-two and one vs. three being the standard types that are played between rounds. Additionally, there are one-on-one dueling mini-games (playable by using the dueling glove item or landing on the same space as another player during the last five turns of a game), and battle mini-games, in which all four players compete for a jackpot of their coins.

The mini-games can be a bit hit or miss. There are plenty of really fun mini-games, and then there are some that are just more frustrating than anything, with some being blatantly based more on luck than player skill. 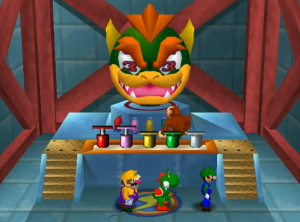 This luck-based nature isn’t just found in mini-games, either. There are instances where players will randomly find hidden blocks containing stars or myriads of coins, and many level gimmicks will often screw players over. You can go from first to last place in the span of a single turn, no matter how well you’re performing on the board or in the mini-games.

Granted, this luck-based gameplay actually does reflect the nature of many real-life board games. But it doesn’t change the fact that, in a video game, it just feels so frustrating.

With that said, a game of Mario Party 2 with a full party of four players is a whole lot of fun. The game’s competitive nature – and even some of its more random elements – make it the kind of game that’s riotous fun with friends. And if you get tired of the board game setup, there’s always modes built strictly for the mini-games, as well as a host of unlockable content.

On the downside, Mario Party 2 is simply not engaging when playing solo. The Mario Party formula only works when playing with others. As a single player experience, the randomness and other frustrating elements are only magnified, without the interactions with friends to make them more ironic and enjoyable.

That really sums up Mario Party 2. Great (if not exactly deep) multiplayer fun, but not much of anything to speak of in terms of single player modes. Bring a few friends to the party, and even the more frustrating elements of Mario Party 2 become fun.