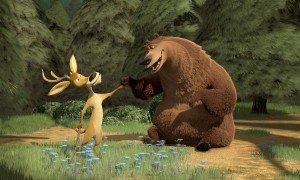 When it comes to big CG animation studios, perhaps none has a rockier track record than Sony Pictures Animation. Though they’ve seen some modest box office success, the quality of their films has consistently lacked. Try as hard as they might, Sony Pictures Animation Studios has fallen considerably short of Blue Sky Studios, let alone the likes of Dreamworks or Pixar. Case in point, 2006’s Open Season was Sony Pictures Animation’s attempt at the animated buddy comedy, which had been popularized by the likes of Toy Story and Shrek, but ended up being an entirely forgettable feature.

Open Season tells the story of Boog (Martin Lawrence), a kind-hearted bear raised by a park ranger, and Elliot (Ashton Kutcher), a dimwitted dear, and the film’s token comedic buddy-sidekick.

Boog has been pampered by his lifestyle as a pet, and as you probably guessed, his life is turned topsy-turvy when he saves Elliot from the grill of a hunter’s truck. Elliot returns the favor by sneaking Boog into a grocery store, where the duo binge on junk food. After Boog gets drunk on junk food (yeah, seriously, he gets drunk from it), he continues to misbehave, leading the park ranger to place him into the wild.

Once in the forest, Boog reunites with Elliot. Unfortunately for them, they accidentally end up in the hunting grounds, just as open season is about to begin. What’s worse, the hunter who Elliot escaped from is determined to get the deer back, as well as the bear who rescued him. Yeah…

Okay, I’m not asking for every animated feature to be an animated masterpiece, and I’m perfectly fine with some cartoonish silliness. The problem with Open Season isn’t in its plot (or lack thereof), but in that its cartoonish silliness isn’t the slightest bit funny or original.

Open Season features countless bathroom jokes, and even throws a puke gag in for good measure. Some might argue that it’s a kids’ movie, but when kids’ movies have to constantly fall back on poop jokes, it only speaks down to its target audience. Kids deserve good storytelling and writing as much as anyone.

Any hope the story might have to stand on its own is all but eviscerated by how obscenely cliched it is. Boog and Elliot themselves are about as stock as it gets. Friendly big guy meets annoying sidekick was basically the foundation of every non-Pixar CG film during the mid-2000s, and the way the plot plays out is as textbook as it gets. Open Season even tries to throw in some emotional moments, but they only feel like they’re there because that’s what other animated features were doing. And considering the characters are little more than cardboard archetypes and poop jokes, it kind of makes it difficult for any emotion to resonate with these scenes.

To top it off, Open Season is just ugly to look at. The film is now ten-years old, but it looks more like twenty. CG animated films from years prior have held up better from a technical standpoint, but the uninspired character designs only reinforce the film’s unappealing visuals.

In a nutshell, Open Season is as cliched as they come, lacks character, the humor is dumb, and it’s just so ugly. Somehow, it’s still spawning direct-to-video sequels to this day. But if the original is this shallow, I’d hate to see what its sequels that couldn’t even make it to theaters have in store…